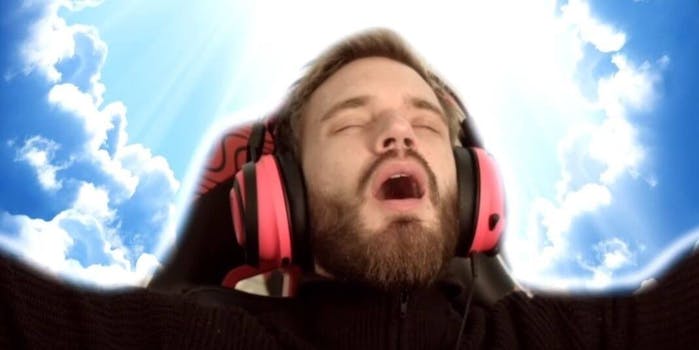 The world's most popular YouTuber was gone 37 days.

After a 37-day hiatus that saw him temporarily abandon his YouTube channel and travel with his wife Marzia to Japan for an extended vacation, PewDiePie has returned to his vlogging life. And the most popular YouTuber in the world said it’s nice to be back.

“I have returned. How do I do make video? Help,” PewDiePie said in a vlog released Friday. “That’s right everybody, I have returned … I broke my 10-year streak of daily uploads to go on a one-month break to do …”

Then, he stopped talking, so he could insert the sound of crickets chirping.

“I haven’t done much,” he continued. “It’s been nice actually.”

In mid-December, PewDiePie, aka Felix Kjellberg, who now has 103 million YouTube subscribers, announced he’d be taking a break from YouTube, saying, “I made up my mind. I’m tired. I’m tired. I’m feeling very tired.”

In his new video—which accumulated about 500,000 views an hour after it had been uploaded—he immediately went into his traditional meme review, but he sprinkled his commentary with updates about what he’d been doing and how he’d been feeling.

“Technically I wouldn’t have to come back [to YouTube],” PewDiePie said. “I could probably retire if I wanted to. It was good for me to take a break to sort of process what I’m doing and what I want to do in the future. And there are definitely some changes I will have to do with the channel, but I’ll do them gradually. I’ve been obsessing too much about YouTube and pushing myself way too hard for too long. There is other stuff I want to do as well. I’m working on bigger projects as well. I don’t want to limit myself to doing daily just for the sake of it, although I have been missing it a lot.”

But he also learned something important about himself: He can pry himself away from the platform for weeks at a time if it’s in his best interest.

“I thought I wouldn’t be able to go on a break,” PewDiePie said. “I thought, ‘Maybe I’m so addicted to YouTube that I will be clawing on the walls.’ No, turns out I was completely fine. I was in Japan so it was easy to distract myself. It made me appreciate that I have an audience. I kind of had just taken it for granted. I’ve only seen the negative parts of having an audience just because my following became so big that I just got really tired of constantly being asked for stuff from people in the street.”

Now, though, you can expect PewDiePie to continue his daily upload schedule—“We’ll try at least,” he said. “We’ll see”—and he said the supportive comments he received from his fans “cheered me up.”

“It’s been really healthy and good for me to take this break,” he said. “I appreciate everyone’s patience while I was gone. It was necessary. ”