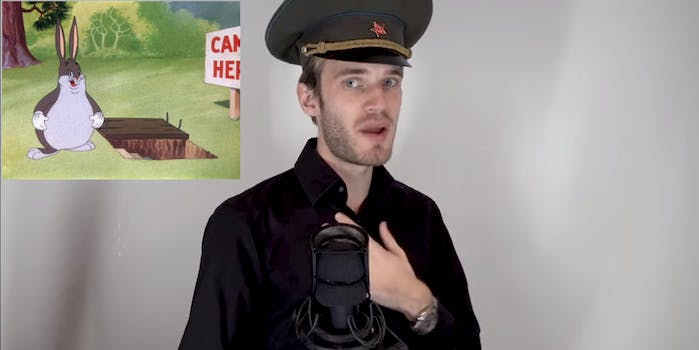 The YouTube gamer takes another shot at a colleague.

PewDiePie has been making headlines recently, but it has nothing to do with his content.

The mega-popular YouTuber has been in the spotlight for the steady stream of attacks he’s put out against fellow YouTuber Lilly Singh. PewDiePie can’t seem to get enough of Singh, as he’s spent much of his time these last few months criticizing her content and calling her names.

In his end-of-the-year “Meme Awards 2018” video, PewDiePie—whose real name is Felix Kjellberg—compared Singh to “Big Chungus,” otherwise known as a fat Bugs Bunny meme. PewDiePie threw out the casual attack at the 4:40 mark.

“I don’t think people fathom how big ‘Big Chungus’ really is,” he said. “Big Chungus has gotten so popular, that they got a live-action confirmed with it. And its played by Lilly Singh! Finally, a real actor.”

The meme recently cropped back up after a woman tried to buy a Big Chungus game from a GameStop employee, unaware that her son was playing a joke on her and that no such game exists. The employee, Justin Laufer, shared the story to Facebook and the internet took it from there. Within days, Big Chungus had multiple “sequels” across platforms.

I just had a customer come in to my store, sweet lady, who was trying to pick up a game for her son who works at a…

PewDiePie’s dig is just the latest in his ongoing feud with Singh. In 2018, the Swedish YouTuber criticized her vlog about mental health, called her a “crybaby and an idiot” after she noted the lack of women on Forbes’ list of top 10 YouTube earners, and even threw shade at her involvement in a Fahrenheit 451 adaptation.

Thus far, Singh’s only response to PewDiePie has been via Twitter. In early December 2018, she wrote “Hey @pewdiepie, I just followed you. Please follow me back again so I can DM you. Speak soon hopefully.”

Hey @pewdiepie, I just followed you. Please follow me back again so I can DM you. Speak soon hopefully =) x

Singh has not yet responded to PewDiePie’s most recent comments.