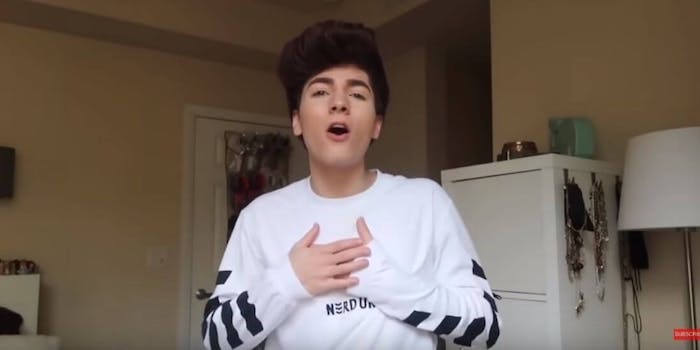 Paul Zimmer was canceled years ago. Is he back as Troy Becker?

'He didn’t even try to look like a different person.'

Former Musical.ly star Paul Zimmer, who disappeared for about 18 months after being accused of defrauding his fans, has reportedly resurfaced with an entirely new identity. He also made a wink and nod from the person he used to be—or still might be.

As reported by YouTuber Danny Gonzalez in a video from last month that has more than 3 million views and the New Statesman this week, Zimmer appears to have morphed into a new person named Troy Becker.

“Paul Zimmer was one of Musical.ly’s former biggest stars. [He] disappeared, and now he’s now back,” Gonzalez said in his video. “But he’s pretending that he’s not. He’s pretending to be someone else. He’s pretending that’s he’s just a different dude. He’s really hoping nobody noticed. But guess what? I noticed and so did everyone else.”

In 2017, Zimmer was one of the biggest stars on Musical.ly—which then became TikTok—and boasted 7 million followers. But it all came crashing down when he reportedly began asking for “gifts” from his young fans.

As the New Statesman notes, gifts were “paid-for stickers that users could send to their favorite stars, which transferred the cash value of the gift to that star, from his fans in exchange for favors such as shout-outs in videos, sharing their videos on his page, and sending them personalized DMs thanking them for their donation.”

The hashtag #BanPaulZimmer appeared in April 2017 as people accused him of not keeping up his end of the bargain. They said he took their gifts (i.e., their money) but then didn’t pay them back with shoutouts or DMs like he promised.

Last October, though, Zimmer returned to introduce Becker to the world, posting Instagram photos of himself and of who he said was Becker (though it looks exactly like Zimmer). In his caption, Zimmer wrote, “This actor @TroyBeckerIG kid literally looks like a younger sexier version of me. I don’t even use social media anymore but had to post this hahah…”

As reported by the New Statesman, Zimmer returned to Instagram on Dec. 10 and wrote, “IM TELLING YOU HE IS MY YOUNGER BRO” with a crying laughing emoji. Eight days later, Zimmer wrote, “Hey it’s Paul Zimmer, this is prolly gonna be my last social post ever… I have come to a place in my life where being in the spotlight and being an entertainer is no longer my passion… although it deeply saddens me to leave so bluntly, especially that so many of you have watched me for so many years…. I didn’t wanna leave my social media pages just sitting to die… soo I have decided to give my social media accounts to @troybeckerig because he is one of the dopest people I know and he is literally my younger twin my much younger twin I believe Troy is 15 or 16 years old hahaha…”

But other YouTubers have noted that the voices of Zimmer and Becker sound the exact same, and on TikTok, many comments on Becker’s content ruefully refer to him as Zimmer.

“He didn’t even try to look like a different person,” Gonzalez said.

Since these reports have emerged, Zimmer has deleted his Instagram page, and the TikTok account from Becker has disappeared.