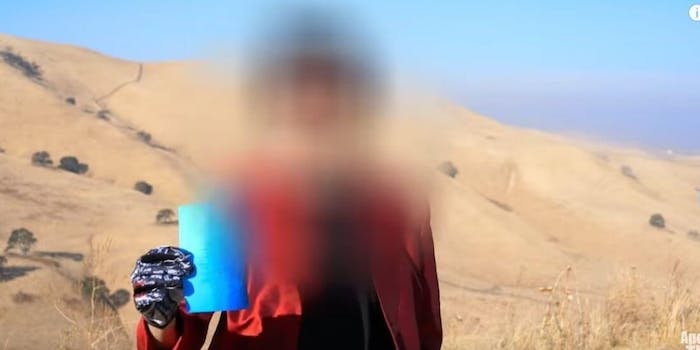 YouTube time traveler returns to prove L.A. is underwater in 2075

Just before the calendar transitioned from 2019 to 2020, a popular YouTube channel uploaded a video from a supposed time traveler showing a supposed photo from Los Angeles 55 years in the future.

And like most of the videos on ApexTV, which has more than 1.1 million YouTube subscribers, the person’s face was blurred and his voice was disguised. In this case, the man’s hands were covered by gloves (for some reason), and the photo he displayed from 2075 is suspicious.

But hey, the video is a fun watch anyway if you have 17 minutes to spare.

The apparent time traveler is a man named Kasper, who was previously featured on ApexTV last May when he said Los Angeles would be covered by water by 2063 and that he would show photographic evidence that L.A. was an underwater city in the future.

Now, Kasper is back to show off his supposed proof. But he feels your skepticism.

“You may be asking, ‘How can you be from the future?’” said Kasper, who claimed he was raised by two robots. “The truth is time travel is real. It is not only real, but it is happening all around you. Most people in year 2019 have no clue about the secret technologies hidden from them but the technology still exists.”

Kasper said the technology that makes time travel possible will be unveiled to the public in 2028 and that in 2021, chip technology will be released that will allow people to live longer. Other events that Kasper said would occur include the ability for citizens to upload their brains to the internet and that people would begin meeting aliens (though these aliens are not from space and they bring “peace and prosperity” to the world).

As for L.A. being underwater, he said it’s actually seen as a good thing because the city still exists surrounded by a waterproof bubble. He blames global warming for the submerging of America’s second-most populated city, but he also said that it’s possible to fix the problems that will eventually put L.A. into the sea.

Even if you don’t believe Kasper—and really, it’d be completely appropriate if you didn’t—he said he’s prepared to show you even more evidence from the future at some point between now and then.