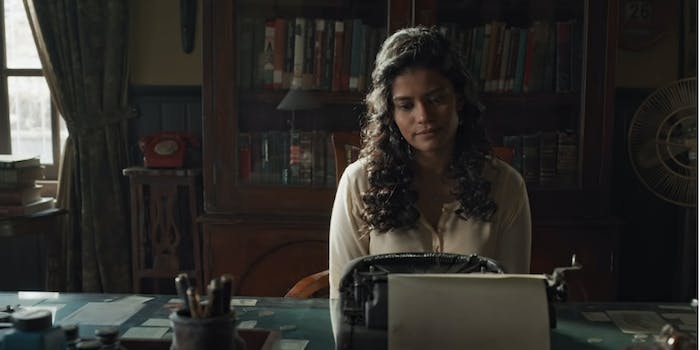 'Typewriter' is the latest Netflix series to allegedly cause insomnia.

Typewriter, a new Netflix series about a haunted house, is experiencing the “so scary” bump.

The five-episode Indian series, which was released July 19, has received fairly positive reviews (at least on Twitter) and comparisons to The Haunting of Hill House. And like THOHH, it’s the latest Netflix title to get the “so scary” bump, which is part of the “so scary people can’t sleep” trend. CNN ran with the headline “New Netflix show is so scary people say they can’t sleep,” even though no tweets they reference explicitly say that, and Google presents a few variations of that headline. 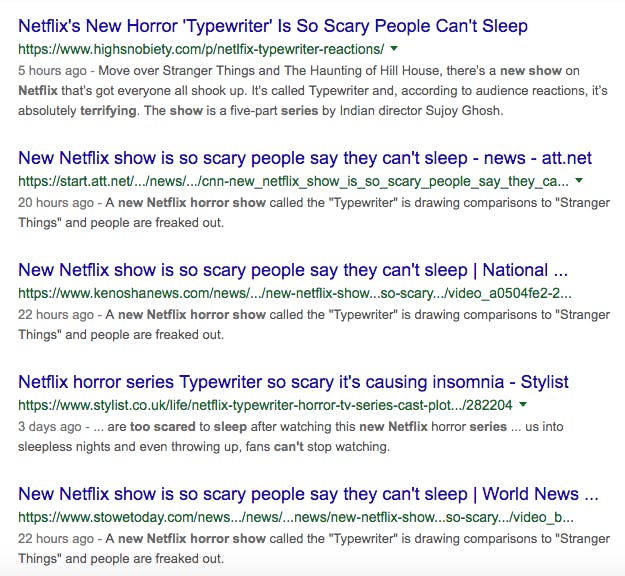 Verónica, a 2017 Spanish horror movie, was one of the first widespread examples of this trend on social media, though it was amusingly touted as the “scariest movie ever.” People wondered if this was some covert Netflix promo to drum up interest, something the company has denied doing for other viral titles. But over the last year or so, a more specific headline construction has appeared.

Secret Obsession, a Netflix film we gave a rating of half a star out of five stars, is so scary people can’t sleep.

So is Chambers, a series released earlier this year starring Uma Thurman.

And so was stalker-thriller You.

Netflix’s acclaimed series The Haunting of Hill House and original film The Perfection both allegedly elicited more physical responses from viewers, and while people sharing visceral responses about pop culture they’ve consumed is perfectly normal, there seems to be a chasm between cherry-picked reactions and clickbait presentation. The other part of this headline cycle is people asserting said show or movie is not scary, and some people are doing that for Typewriter, but this exhausting headline construction has now become a source of parody.

Is it really a scary Netflix series that’s causing mass insomnia, or something deeper and more intractable? Thankfully, people can always turn to Netflix if they can’t sleep.