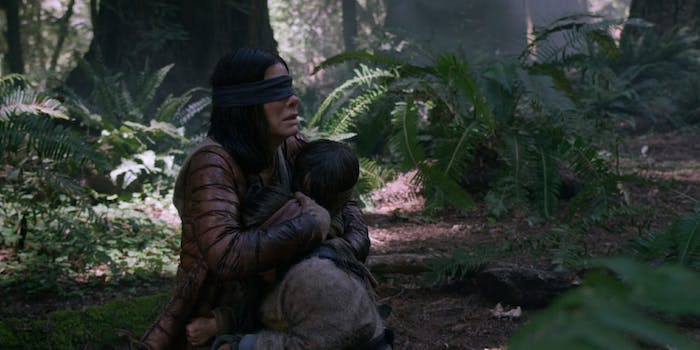 Horror film Bird Box launched on Netflix last Friday, and the movie has since taken social media by storm. Love it or hate it, Twitter is packed with memes surrounding the film. But some believe the Bird Box memes aren’t coming from real users. Rather, one conspiracy theory claims Netflix used meme-posting Twitter bots as part of a marketing ploy.

Netflix tells the Daily Dot that this isn’t the case and that the memes have spread “organically.” The Daily Dot spoke to the alleged bots over Twitter DM but was unable to independently ID these users, who appear to be underage.

The allegation went viral Friday after Twitter user @CHASETHEBUSSY shared a meme from Twitter user @uwurebeca that used the #BirdBox hashtag. In @CHASETHEBUSSY’s tweet, the user points to @uwurebeca’s low “follower and following count,” claiming that Netflix is using bots “to advertise their godawful original films.”

Man this is very disturbing to me the more I think of it. The fact that twitter would allow a corporation to conjure up fake hype shows how easy it is to disseminate false information on social media platforms and how little the apps actually care about such practices.

A followup video posted by Sam Weinberg, an editor for music website Underground Underdogs, scrolls through the #BirdBox hashtag and looks at six different Twitter accounts with relatively low follower and following counts, in an attempt to prove that #BirdBox memes are being posted by bots. His suspicion went viral, with over 6,000 retweets and 19,000 likes.

@CHASETHEBUSSY stressed that the memes looked suspicious because posts “seemed to flood the timeline almost immediately with memes [referencing] specific parts of the film with over 10k retweets.”

“And like why would an account’s (that has never showed interest in Twitter beforehand) first tweet be about a Netflix original film? And how could it possibly get as much attention as these accounts with one follower or so are getting?” @CHASETHEBUSSY added. “It’s just incredibly suspect that all these random accounts with no tweets previously want to make Bird Box memes all of a sudden.”

Weinberg said that he initially didn’t think anything of @uwurebeca’s post, but after he saw @CHASETHEBUSSY quote tweet it, he started browsing through the #BirdBox tag and recorded himself.

“I didn’t mean to imply that there is no way an account with few followers and posts can’t be a real person, and I’m sure there could be a couple of real accounts that got wrongly implicated by my tweet,” Weinberg said via DM. “But by and large there is something fishy about how many accounts there are with the same m.o. posting memes about Bird Box.”

same i wonder who they’re outsourcing this stuff to. i bet there are some reputable / supposedly above board social media firms that offer these types of legal gray area guerilla campaigns for bigger clients on the low

It is fake content that has been paid for by Netflix. In the @CNN article about bird box memes all the accounts they link either post every few years, only engage with brands or only post about bird box.

are you telling me Netflix made this meme pic.twitter.com/gJHhJrQxox

— the feeling of cold silk passing over skin (@ConsiderdLobstr) December 28, 2018

Weinberg’s suspicion is understandable. While the film has sparked a wide range of memes and even a “Bird Box challenge,” the movie was critically panned by reviewers and sports a mere 65 percent rating on Rotten Tomatoes. Some viewers loved the film, but others found it boring and derivative, fueling skepticism about why social media users feel inclined to post so many memes about it.

That doesn’t mean bots are behind the memes. While several of the users in Weinberg’s story have minimal followers or very few tweets, most Twitter accounts were created months before Bird Box’s release and liked posts unrelated to the film well in advance of its appearance on Netflix. Others tweeted about unrelated subjects prior to Bird Box‘s release, and two users posted selfies on their timelines before the film’s release.

“Like i swear to G o d, i’m a real person smh and i actually don’t know why the bird box tweet got so many likes, like i was surprised because it was my first time tweeting something,” @uwurebeca added.

“The meme content happened and spread organically,” the spokesperson said.

The Daily Dot reached out to @uwurebeca and two other users in Weinberg’s video for comment.

The Daily Dot spoke to one poster in Weinberg’s video, Twitter user @callmekick03, who shared two tweets under the #BirdBox hashtag. She claims she’s never posted sponsored content or advertising for a brand on social media, and that her follower count is low because very few of her friends are on Twitter compared to Instagram.

“I just liked the movie and tweeted a meme I didn’t actually think it was gonna get any attention,” she said. “I wasn’t thinking of advertising the movie.”

After being shown the tweet from Weinberg by the Daily Dot, she publicly tweeted at him, saying that she feels “honored” but “this is just a conspiracy theory.”

Another Twitter user shown in Weinberg’s video, @yeimir100, posted a Bird Box meme and quote tweeted a second one. Like @callmekick03, she said that she had never done sponsored content or brand advertising in the past before.

“Oh my tweet was created by me you saw that picture in Instagram and it reminded me of Bird Box and I thought it was pretty funny so I tweeted it,” she said. “And yes it was my first tweet but I promise you I’m not being paid.”

A third Twitter user shown in Weinberg’s video, Tara, said she is “obviously not a fake account.” Like @yeimir100 and @callmekick03, she claimed that she has never done any sponsored content work or paid advertising on social media before and that she merely wanted to join in on the Bird Box memes.

“I genuinely enjoyed the movie and saw other people tweeting so I just joined in, I never really post on Twitter or like posts I just look at what people I follow have said,” she said. “It doesn’t mean I’m not a real person hahahaha. It’s just a funny tweet that’s all :).”

As for @CHASETHEBUSSY, he seems undeterred. When told that users in Weinberg’s video denied being bots and that Netflix said the memes spread organically, he said the situation is “way too coincidental.”

Weinberg, on the other hand, said that he’s giving “the benefit of the doubt” to accounts that claim they’re run by real humans.

“I think the accounts that reached out to defend themselves are real. I mean it’s possible that they could still just be sock puppet accounts backtracking, but I’m giving them the benefit of the doubt here,” he said.

The demons watching the group driving to the grocery store #BirdBox pic.twitter.com/nJ1QMQSb6s

In an age where fake news and Twitter bots steered one of the U.S.’ most divisive presidential elections, it can be hard to tell who’s on the other end of a tweet. Most of the users posting under the #BirdBox hashtag look like real people, and teens or young adults to boot. More likely than not, they’re simply engaging with popular brands and mainstream content that everyone else is talking about—getting caught in the crossfire in the process.