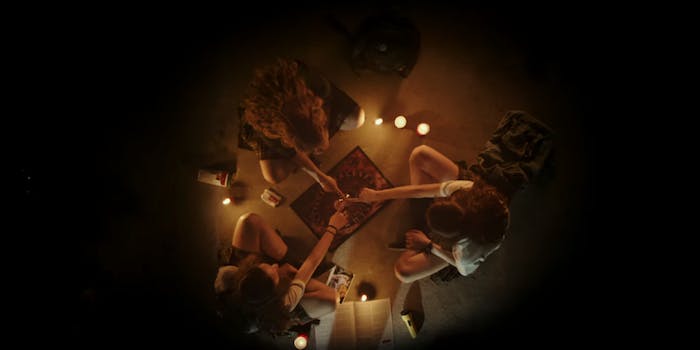 ‘Verónica’ is scaring the s**t out of everybody

Verónica appeared out of nowhere earlier this month, from Spanish horror director Paco Plaza. And while it’s not a Netflix original, it’s developed buzz for being scary as shit, and because it’s reportedly based on a true story.

The film follows a teenage girl, Verónica (Sandra Escacena), who holds a seance with her friends in the basement of their Catholic school while everyone else is outside watching a solar eclipse. If this confluence of events sounds like a bad idea, you’re right, because instead of reaching her deceased father, she channels a demon. And one of the parts that has people “Nope”-ing is right after the seance, when Verónica’s mouth opens unnaturally wide, a favorite trope in more recent horror films.

The movie is apparently loosely based on a real case from Madrid in the ’90s, called the Vallecas Case. It also involved a teenage girl, Estefania Gutierrez Lazaro, who reportedly used an Ouija board at school and later experienced hallucinations and seizures, dying mysteriously in 1991. After her death, her parents claimed to have experienced continued paranormal activity, such as a large figure looming in their hallway.

The film didn’t really come out of nowhere; it screened at the Toronto Film Festival last year, where Plaza explained that it was “impressive” that the Vallecas case was one of the only times police have noted something paranormal in their records, but he didn’t want to make the film just “reconstructed events.” He adds that they sourced another paranormal case in Madrid in the ’90s for the film: “In the early ’90s, something happened in the energies of Madrid or something.”

Verónica‘s not the scariest movie ever, as some headlines and memes have promised, or even the scariest on Netflix; perhaps that’s just some clever viral marketing. But it is a stylized haunt with emotional weight and solid performances. It also speaks to a woman coming of age (in the most horrific way possible).