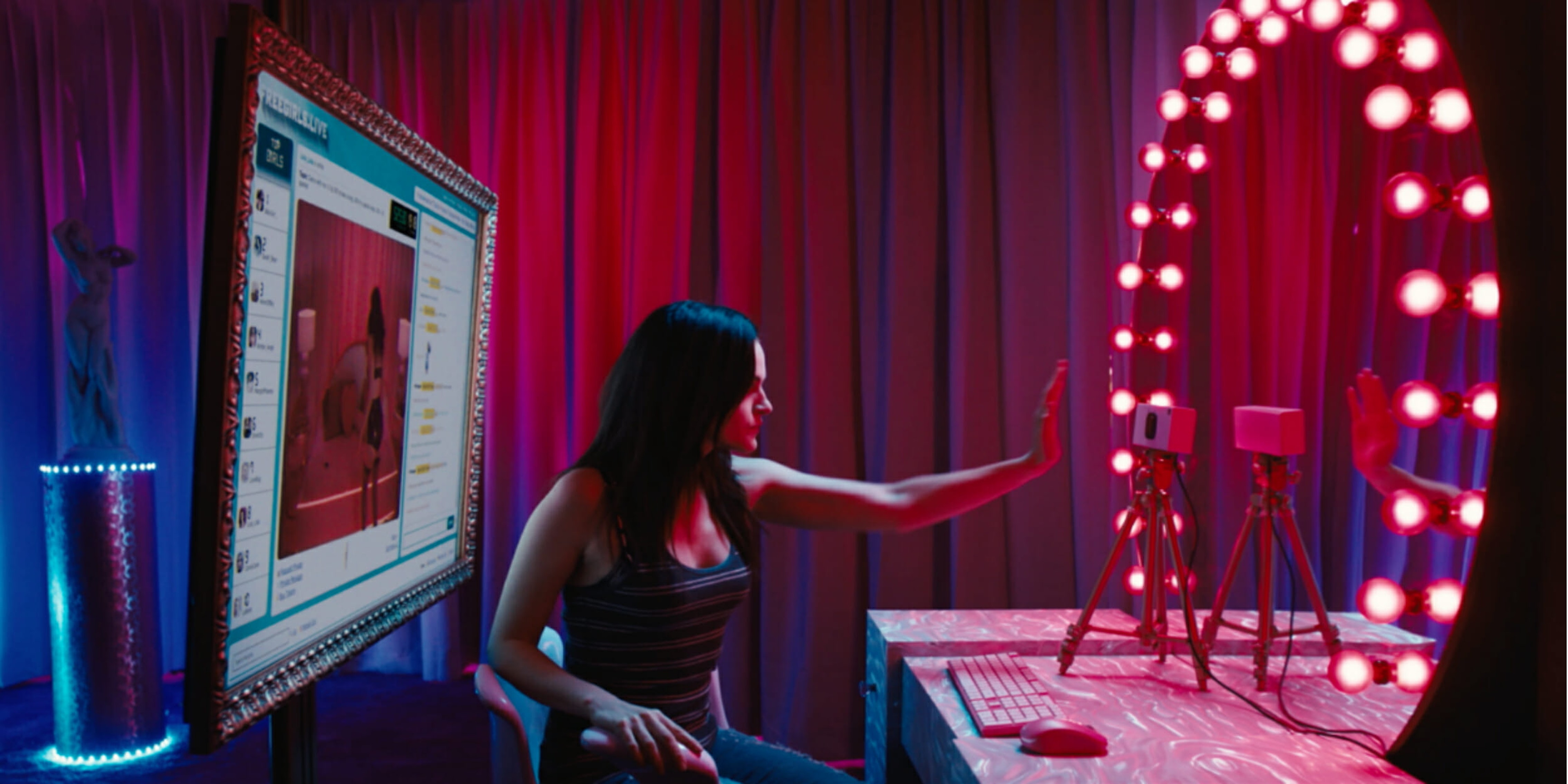 The fear at the heart of Cam is palpable and universal: You’re locked out of your account. But it treks even deeper into the maw for an imaginative and terrifying look at the prism of online identity.

The thriller, out Friday on Netflix, opens on a cam performer named Alice (The Handmaid’s Tale’s Madeline Brewer) performing a show as her alter ego Lola. She addresses the patrons entering the virtual room like old friends but also sets up boundaries to keep a veneer of authenticity. They tip her freely, but Alice is still a content creator, and she always has to think about ways to up the stakes and stay popular. Sometimes that involves a knife.

Cam was directed by Daniel Goldhaber and written by Isa Mazzei, who had first-hand experience as a cam performer. Mazzei worked with Goldhaber previous to Cam and was interested in telling a story that would get people to see that “sex work is work, and it’s normal,” she told the Daily Dot.

They talked about making a documentary but eventually settled on a genre film that drew from Mazzei’s experiences, both good and bad. The messages and GIFs Lola receives from patrons, which are colorfully illustrated on screen, came from a 98-page script that reflect the spectrum of personalities Mazzei encountered.

Some of those personalities cross boundaries. Patch Darragh (Everything Sucks!) plays Tinker, one of Alice’s loyal fans who has developed an unhealthy obsession with her. We see the panic on her face when she spots him at a store in her town, but she has to toggle between identities and emotions when she runs into an old friend. Her teenage brother (Devin Druid) knows what she does for a living, but her mother (Melora Walters) thinks she works in tech.

Cam details the work that goes into camming, in front of the camera and behind the scenes, and the competition between women. Alice is constantly trying to stay in the Top 50. “How am I supposed to hold my spot, not sleep?” she asks a fellow cam girl, and in that way Cam extends to other platforms like YouTube or Twitch, where creators often face burnout or mental health issues from having to be extremely online all the time.

Lola rides a horrific sex-toy device called the Vibratron in an effort to up her rank. The next day, she wakes up locked out of her account, watching herself perform on her channel. The dread is magnified by the ever-present notification pings.

The second half of Cam finds Alice as investigator after discovering no one really wants to help. A customer support rep tells her she’s being “hysterical” when she reports being locked out of her account; a police officer tells her if she doesn’t want this to happen to her, “stay off the internet.”

“I can usually tell if my girl’s going to be copied,” Tinker explains to Alice when she confronts him about her doppelgänger. But Cam never fully explains what that means. Mazzei says that when deepfakes started getting more media attention, the film was already in post-production, but it made the filmmakers feel a bit “psychic.” She also had her own work pirated and uploaded to Pornhub without attribution, so there was just a “disembodied version of myself that I was completely alienated from, and that was terrifying. I was seeing this form of myself that was no longer me. But it was me.”

Mazzei also wanted to correct how sex work is simplified in the media as either glamorous and easy or dangerous and sleazy. “I think what’s so frustrating is that sex work is the only career where we demand that it be empowering, or we assume that it’s exploitative,” she says. “And we don’t let it exist in a nuanced space for what it is. We don’t demand of a waitress or a programmer or a writer or a retail clerk that their job be empowering. But we also don’t assume that they’re some sort of victim for having chosen to sell clothes at Forever 21.”

Assumptions about sex work followed Mazzei when she tried to pitch the script with Goldhaber. Executives grilled her about the craziest sexual act she’s ever had to perform. Others weren’t sure why she had to be involved. One guy rewrote the end of the script to include him and Mazzei in a demented kind of fan fiction; he saw it as a joke, while she saw it as sexual harassment. She says Blumhouse, the production company behind Get Out and this year’s Halloween remake, actually got the story she was trying to tell.

The film is light on the actual mechanics of how camming works, and there are some nagging questions that go unanswered, even when Cam hints that something more sinister than deepfakes might be at play. The narrative feels a little trapped in Lola’s screen, leaving us with few moments of real emotional IRL connection. Alice talk with her mom after her job is revealed stands out: Her mom seems to be supportive, or at least understands her choice. What else has happened between them? Does Alice have any good friends?

But perhaps that is by design, and the isolation is part of the horror. Mazzei says the character came from “wanting to express the anxiety around my own digital identity, and I was deriving my personal validation from my performance and from my digital persona’s validation. It was this constant anxiety of, ‘Do my viewers like me? Do they just like this persona I’ve created? And also how much of my persona is real?’”

Alice eventually devises a way to combat her double with a hardcore display of ego death, which pivots the film to a new direction, but Mazzei says writing Cam gave her some insight about the separation of real and online self.