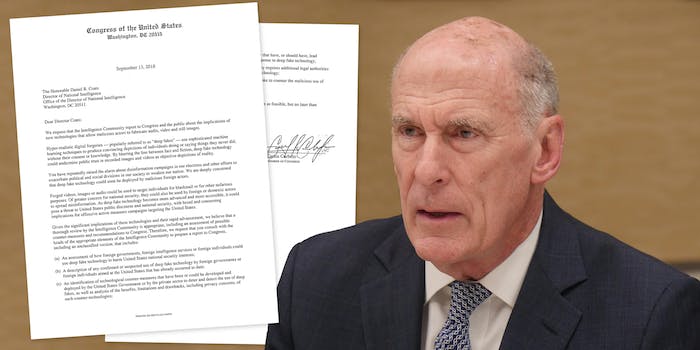 Lawmakers say deepfakes could be a national security threat

Representatives have requested an intelligence report on the possible dangers.

Motherboard reports that on Wednesday, three members of the House of Representatives sent a letter to the intelligence community requesting information “about the implications of new technologies that allow malicious actors to fabricate audio, video and still images.”

The signees—Adam Schiff (D-Calif.), Stephanie Murphy (D-Fla.), and Carlos Curbelo (R-Fla.)—warned about the possible misuses of deepfake technology and asked for information on foreign entities using or suspected to be using deepfakes.

“Forged videos, images or audio could be used to target individuals for blackmail or for other nefarious purposes,” the letter states. “Of greater concern for national security, they could also be used by foreign or domestic actors to spread misinformation.”

The letter also requested details on the U.S. government’s intended counter-measures and monitoring of deepfakes. As Motherboard notes, multiple lawmakers including Sen. Marco Rubio (R-Fla.) have previously voiced their concerns about the technology, which is unsurprising given its potential dangers in the wrong hands.

Both Twitter and Reddit have banned deepfakes (with mixed results) in the past year for its issues regarding consent, and the newest iteration of the technology can synchronize words and gestures from one video to another. In short, it could soon be hard to differentiate a real video from a deepfake—as if misinformation wasn’t spreading rapidly enough already.

The lawmakers asked that the intelligence community compile a deepfakes report by mid-December.