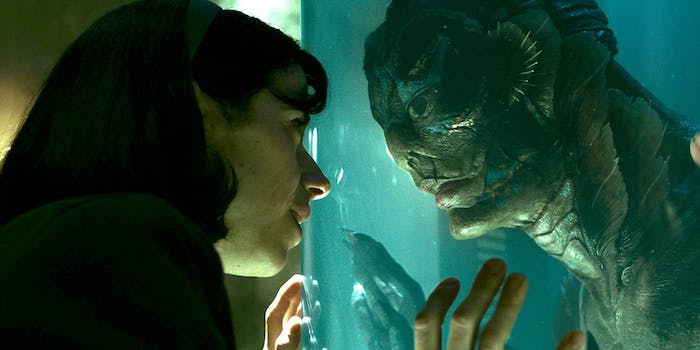 The 11 best monster movies to stream on Amazon, YouTube, and more

The genre is deceptively broad.

Ah, monster movies: a deceptively broad genre, but satisfyingly self-explanatory. From horror to action to offbeat love stories, this list of movies covers everything from clunky, vintage prosthetic monsters to expensive, modern CGI.

Here are the 11 best monster movies available to watch online. (But if you’re looking for vampires or werewolves, you can find those recommendations elsewhere.)

The 11 best monster movies of all time

This genre-defining classic still holds up, arguably more so than some of the classic American monster movies like Frankenstein and The Invisible Man. Directed by Ishirō Honda, this film kickstarted the Japanese kaiju genre, which is obviously still strong today. Drawing from post-war anxieties of nuclear radiation, it’s a disarmingly moving sci-fi drama that unintentionally inspired decades of films and TV shows where people stomp around in rubber monster costumes.

Available for free on Archive.org and to stream on TCM, Fubo, and the Criterion Channel

Do you know how hard it was to just pick one Guillermo del Toro movie for this list? More than half of his filmography qualifies: Mimic, Hellboy, Pan’s Labyrinth, and Pacific Rim, too. In the end, we went for The Shape of Water, a tender, politically insightful love story that riffs on the classic Creature From the Black Lagoon. Sally Hawkins stars as a janitor who falls in love with an amphibious creature while working at a mysterious research facility in 1960s Baltimore.

Available to stream on FXNow and rent or buy on Amazon, iTunes, and YouTube

Already a favorite among monster movie buffs, The Host is gaining momentum after director Bong Joon-ho swept the Oscars with Parasite this year. Song Kang-ho stars as a goofy working-class dad whose daughter gets kidnapped by a kaiju. It sets off a characteristically dark yet witty take on monster movies, with a healthy dose of social satire.

Available to rent or buy on Redbox, YouTube, and Vudu

John Carpenter’s The Thing is rightfully iconic, an immersive thriller set on a remote Antarctic research station. Combining gruesome special effects with the ominous fact that the Thing can disguise itself as a human, this movie is the best of both worlds: psychological horror and cool monster effects. Kurt Russell leads a cast of “hey, it’s that guy!” character actors, playing the base’s taciturn helicopter pilot.

Available to stream on Starz and to rent and buy on Amazon, iTunes, and YouTube

Unequivocally the scariest film on this list, The Babadook‘s titular monster is a metaphor for grief. Don’t be fooled by the memes: This film is legitimately terrifying. Australian filmmaker Jennifer Kent wrote and directed this low-budget monster horror movie about a single mother who struggles to contend with her son’s creepy imaginary friend.

Available to stream on Showtime and DirecTV and rent and buy on Amazon, YouTube, and iTunes

This offbeat Norwegian mockumentary is an imaginative twist on the found-footage subgenre. The monster movie stars a team of student filmmakers who accidentally stumble upon real-life trolls—and the government-funded warden tasked with handling Norway’s secret troll population. It’s gross, it’s funny, the special effects are great, and the fantasy world-building is impressively thoughtful.

Available to stream on YouTube Free, Roku, Hoopla, and Tubi

On the off chance you haven’t seen John Boyega‘s brilliant breakout roll, now’s the time to watch Attack the Block. Joe Cornish (with input from the film’s young cast) wrote and directed this British sci-fi comedy that also features Doctor Who star Jodie Whittaker. It’s an adventure story about London teenagers battling an alien invasion.

Available to stream on DirecTV and Crackle and to rent andbuy on Amazon, YouTube, and iTunes

One of many schlocky sci-fi movies released in double-bills in the 1950s, The Blob stood the test of time partly because it’s Steve McQueen’s debut and partly because it’s just a great movie. The titular Blob is an alien creature that encroaches on a small American town. But what makes this film great is its human characters. This monster movie is an unexpectedly sensitive and realistic portrayal of 1950s teen life, very different from McQueen’s eventual niche playing tough antiheroes.

Available to stream on Kanopy, Crackle, and the Criterion Collection and to rent and buy on Amazon

Need we explain Jaws? There’s a big shark. It’s directed by Steven Spielberg. It’s undoubtedly one of the best monster movies ever made.

Available to stream on Max Go, Cinemax, and DirecTV and to rent and buy on Amazon, YouTube, and iTunes

This indie fantasy film is unique, twisted, and grotesquely funny. Its main claim to fame is a well-deserved Oscar nomination for hair and makeup. Set in contemporary Sweden, it’s about a border guard (Eva Melander) who uses her powerful sense of smell to detect smugglers. She’s also a bit of a social outcast thanks to her unusual appearance, living in a secluded house with her crappy boyfriend. But when she meets another man with the same strange appearance and abilities as herself, it kicks off a journey of bizarre self-discovery with twists you will absolutely not be able to predict.

Available to stream on Hulu and Mubi and rent and buy on Amazon, YouTube, and iTunes

Directed by Frank Oz (The Muppets), this rock ‘n’ roll musical is a hilarious riff on classic B-movies. It stars Rick Moranis as a dweeby florist who accidentally adopts a carnivorous alien plant. Little Shop of Horrors‘ songs are catchy, Steve Martin is very funny as a sadistic dentist, and the whole cast really leans into the movie’s ridiculous monster concept. There’s also a remake in the works featuring Chris Evans, Billy Porter and Scarlett Johansson. What more do you need?

Available to stream on Max Go, DirecTV, and Cinemax and to rent and buy on iTunes, Amazon, and YouTube