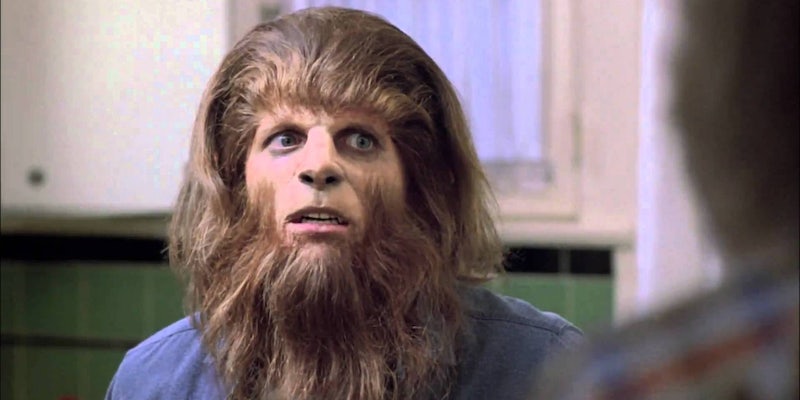 The werewolf genre isn’t quite as popular as Hollywood’s unending passion for vampires, but there are still plenty of iconic werewolf movies to go around. From 1941 to the present day, we’ve selected seven essential examples.

Teen Wolf is a 1980s teen movie classic, not to be confused with the modern MTV series of the same name. Starring Michael J. Fox as the eponymous teenage werewolf, it’s ideal for folks who want to watch a werewolf movie that isn’t too scary.

2) An American Werewolf in London

Famous for its unsettlingly detailed werewolf transformation scene, this cult horror film was directed by John Landis—which explains its balance between moments of terror and the sense of humor we know from movies like The Blues Brothers.

Released in the same year as An American Werewolf in London, The Howling spawned seven sequels over the next 30 years. Starring “scream queen” Dee Wallace in the lead role, it tells the disturbing tale of a young TV anchor who is sent to a secluded resort to recover from a traumatic experience. You will probably not be shocked to hear that her therapeutic vacation does not go as planned.

This film’s title is self-explanatory. Funded on Kickstarter, it’s a hilarious parody of grindhouse horror cliches, following the misadventures of a drunk small-town cop who gets turned into a werewolf.

Director Neil Marshall, best known for his 2005 horror movie The Descent, recently moved to TV work including the memorable “Blackwater” episode of Game of Thrones.

Dog Soldiers was his first film, an action/horror story about a squad of British Army soldiers who come up against a werewolf during a training mission in the Scottish highlands. It’s tense, violent, and very British.

The Wolf Man isn’t the first werewolf movie, but it’s probably the most influential from the early years of Hollywood horror. Preceded by the (now lost) silent film The Werewolf in 1913, and the 1935 Werewolf of London, it stars Claude Rains opposite the prolific horror actor Lon Chaney Jr. Bela Lugosi also appears in a minor role.

7) Harry Potter and the Prisoner of Azkaban

Directed by Alfonso Cuarón (Children of Men, Gravity), The Prisoner of Azkaban is undoubtedly one of the best Harry Potter movies. After the kid-friendly themes of the first two films, this one introduced a darker and more emotionally complex tone—along with everyone’s favorite werewolf schoolteacher, Professor Remus Lupin.