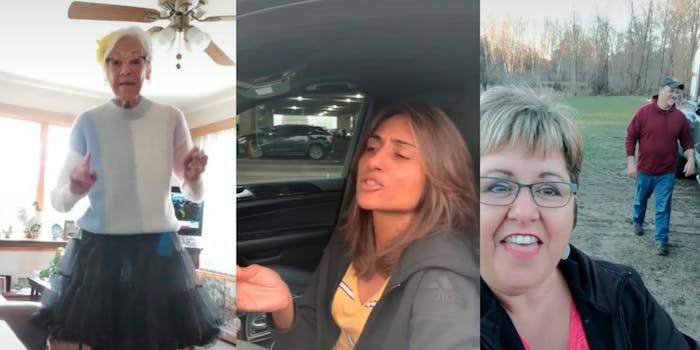 Moms and grandmas are infiltrating TikTok

If the teens are on TikTok, it was only a matter of time before the parents would be, too. And we’ve officially reached mom TikTok.

As detailed in New Statesman, moms (and grandmothers) have found ways to express themselves on the short-form video and lip-sync app, and they’re getting in on its meme-and-challenge format.

The report spotlights a few of the more notable personalities, including a verified creator named Varli Singh who has amassed more than 450,000 fans. Her clips are heavy on third-person references and sometimes feature her daughters. Like a lot of TikToks, the comedy is often hard to discern.

Family accounts were quite popular on Vine and continue to be on YouTube—even if some of the families are more well-known for their bad ideas—so evolution dictates that moms (and families) would end up on TikTok, too. That doesn’t mean they’re not targets for criticism: YouTuber Danny Gonzalez posted a video in March titled “TikTok’s Weirdest Mom,” which singled out Singh’s videos.

Singh responded with her own video, accusing Gonzalez of using negativity to get views. Other YouTubers have posted similar videos about her, with titles like “The Most ANNOYING Woman on TikTok” and “TikTok Cringiest Mom.”

Singh’s videos might be cringe-worthy, but as New Statesman notes, she is influential. Her #DontFearVarlisHere hashtag has been co-opted by other users and viewed more than 11 million times. New Statesman also featured Carey Jolly, who is responsible for this peak mom content—momtent, if you will.

Grandmas have also found a niche on TikTok. Grandma YoYo has more than 112,000 fans and puts out uplifting content. In one clip, she says TikTok has pushed her to do her makeup and get dressed up at age 70. Meanwhile, TikTok creator Ricky Chainz has made his grandma the unlikely star of his videos.

There’s still a subgenre of creators “teaching” their moms how to use TikTok, and some users are still trying out mom impressions.

And of course, moms are still getting pranked, like in this meta-duet of the Me Showing My Mom a Funny Meme meme.