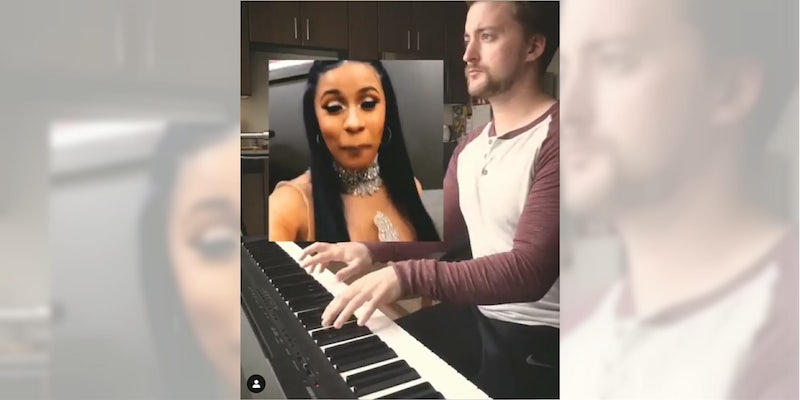 Even Cardi's a fan.

A jazz pianist is transforming viral videos into hilarious original instrumentals that are quickly becoming hits on the internet. While not his first, Charles Cornell’s musical take on an Instagram video of Cardi B flexing Swisher Sweets Uggs blew the 26-year-old up with millions of views.

Uploaded earlier this month, it shows the Denver-based musician matching Cardi B’s inflections and bizarre catchphrases note for note as he follows along on piano. As simple as it is brilliant, the short video rocketed Cornell from a few hundred Instagram followers to nearly 100,000. After his girlfriend convinced him to post it to TikTok, he told the Daily Dot, it quickly went viral. A tweet sharing it has racked up 5 million views and was even retweeted by the rapper herself.

This is the greatest thing I've seen this week @iamcardib pic.twitter.com/HJJqC34ITU

Cornell originally got the idea when reading an article curating many of President Donald Trump’s infamously outrageous Twitter posts. “I wondered what it would sound like if they were put into song. In my head, I started doing one and I couldn’t stop laughing at how stupid and ridiculous the idea was.”

For his first few videos, he sang Trump’s signature name-calling antics about “Crazy Joe Biden” and the “fake news media” accompanied by a piano melody of his own creation.

“I just look for hilarious and/or ridiculous statements that I can work into a rhythmically sensible cadence,” Cornell told the Daily Dot. “If the rhythm works, the melody almost writes itself.”

This was around the first week of May, when he had about 250 followers on Instagram, mostly friends and family. Since they enjoyed the videos, though, he decided to try taking the idea further: “Rather than singing a tweet, I decided to try my hand at transcribing the notes of spoken word. This was something I had seen done years ago by a drummer named Dan Weiss and by a guitarist named Publio Delgado. Both who do incredible work. These videos seemed to do even better than singing the tweets.”

He chose Cardi B as his first test subject because he found her videos funny and thought her speech pattern worked perfectly for this kind of musical conversion.

“I think the Cardi B video did so well because her spoken word is very song-like and rhythmic to begin with, so the video sounded almost like an intentional composition. It’s way harder to do somebody that talks fast and monotone,” said Cornell.

The video’s virality caused some viewers to point out another musician, Instagram user mononeon, who has built a following similarly converting viral videos into guitar solos. While Cornell never claimed to originate the idea, he said on Instagram that he only became familiar with mononeon after his Cardi B video blew up. The coincidence did inspire a pretty epic mash-up though.

Cornell quickly moved on to transcribing beloved creations from the now-defunct platform Vine. While not as popular—after all, lightning rarely strikes twice—they’ve garnered a few hundred thousand views in their own right.

Where most of Cornell’s experience has been, though, is in songs and jazz compositions. His band’s second album, Tales, releases later this year. So it was only natural for him to try applying this treatment to other pop icons like Eminem and Taylor Swift.

Once he began taking requests from fans, he moved on to topical subjects like make-up artist James Charles‘ apology video amid his ongoing YouTube scandal with fellow artist Tati Westbrook. The more fervently fans request a particular video, the more excited he gets about creating its musical counterpart.

“If I have a ton of people all pointing to the same piece of content, it’s pretty likely that it’s going to be a good one! Otherwise, I just look for funny videos that already sound slightly musical in the way the person speaks,” he said.

Last week he even tried his hand at another Cardi B video.

Going viral has been a surreal experience, according to Cornell. But so long as they keep making people laugh, he plans to continue tickling the ivories to the tune of the internet’s favorite videos. Who knows, with a guitarist already making similar content, maybe a full-blown band creating this kind of content isn’t far off.