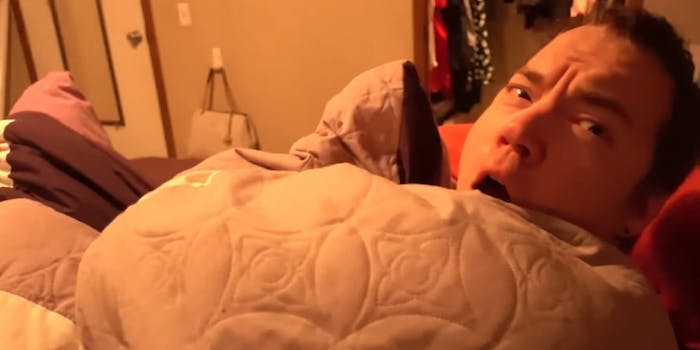 The parents who pled guilty to child abuse are up to their old tricks.

Last year, the parents behind the YouTube channel DaddyOFive lost custody of two of their five children after posting a prank video that was called out as child abuse.

Mike and Heather Martin later deleted their channel—though other channels apparently re-uploaded some of their videos and were punished by YouTube—and the two children’s birth mother was given custody. The Martins pled guilty to child neglect and were given five years probation last September.

But probation apparently didn’t prevent them from starting a new channel. As pointed out by fellow YouTuber Amanda the Jedi, the channel FamilyOFive has taken the place of DaddyOFive, and has been live since October. The trailer for the channel still shows pranks taking place, though now some of them seem to be directed at the parents. Still, the opening shot is one of his sons taking a ball to the groin.

The channel is monetized and has close to 300,000 subscribers.

On the new channel, Mike Martin is still yelling at his sons and setting them up in dysfunctional scenarios, the bulk of which involve catching them in lies or not doing something right. In one clip from May, he berates his son for not holding the camera steady while he’s yelling at them. The sons prank each other too, sometimes physically. In a video from February, son Alex appears to have a bruise under his eye, which he explains happened because he fell off the bed.

The channel Nerd City took a deep dive into some of the comments on DaddyOFive videos, as well as Twitter comments, and found a disturbing thread of people cheering on the abuse of Cody and Emma, the two children who were taken away. The comments on the more recent videos are more critical, but there are still fans who seem invested in the family’s abusive content, and suggest punishments for the kids in the comments.

Update 5:08pm CT, July 18: A YouTube spokesperson sent along this statement: “Content that endangers children is unacceptable to us. We have worked extensively alongside experts in child safety to make sure we have strict policies and are aggressively enforcing them. Given this channel owner’s previous strikes for violating our Guidelines prohibiting child endangerment, we’re removing all of his channels under our Terms of Service.”