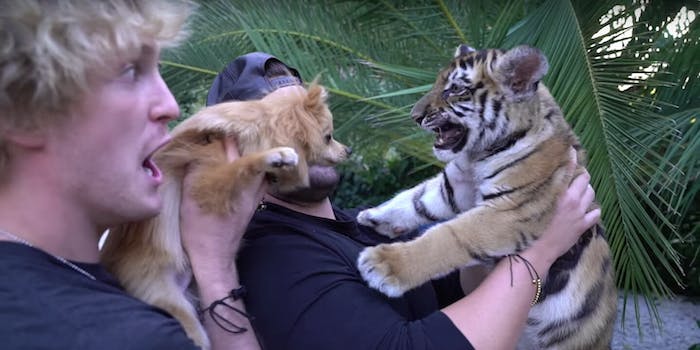 A man who lives in the Los Angeles has been charged with illegally possessing and mistreating a tiger cub that appeared in a 2017 video on Logan Paul’s channel, BuzzFeed News reports.

Paul, a YouTuber with more than 18 million subscribers who’s no stranger to controversy, posted a video in October 2017 titled “KONG MEETS A BABY TIGER! **Showdown**.” The video centers around Paul taking his Pomeranian dog, Kong, to meet the tiger cub for the first time.

“Kong has never met a tiger and we want Kong to meet the tiger,” Paul says to the camera while he drives to Perkins’ house. “It’s a baby tiger, how big can it be?”

When Kong finally meets the tiger cub, the two play around just like dogs would. The tiger cub makes growling noises that Paul says sound like “dinosaur noises.” The video has over 8 million views.

An anonymous tip  to the California Department of Fish and Wildlife helped officials track down Perkins, according to BuzzFeed News. Authorities told BuzzFeed News there was “extensive evidence of the animal’s poor living conditions and the presence of anabolic steroids” on the property.

The tiger cub now resides in a sanctuary and has made a full recovery.