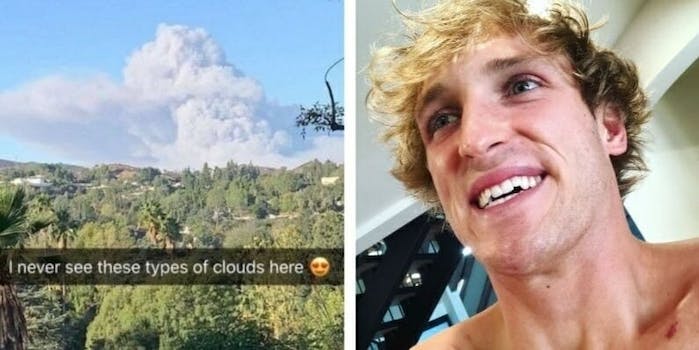 'i never see these types of clouds here😍'

YouTube star Grayson Dolan was so excited to see a strange cloud formation late last week that he immediately went to Snapchat to show off his discovery skills. But considering the unusual-looking clouds was actually smoke from the California wildfires, Dolan has been repeatedly burned on social media with memes of his mistake—and a Logan Paul tweet.

The feud began last weekend when Dolan—who, along with his twin brother Ethan, has 7.3 million YouTube subscribers—Snapchatted a picture of the wildfire smoke and captioned it, “I never see these types of clouds here” with a heart eyes emoji.

That’s when Paul gave him a brutal comeuppance.

Meanwhile, the memes began rolling across Twitter with people taking the “I never see these types of clouds here” (with the heart eyes emoji naturally) and using them on photos of things that definitely aren’t clouds.

And no meme about smoke and clouds can be complete without an image of Tesla founder Elon Musk smoking a blunt on the Joe Rogan podcast.

People on Twitter, though, were upset that Paul took a shot at Dolan, particularly since Paul has permanently besmirched his name in many peoples’ eyes for posting a video of a dead body from a Japanese suicide forest at the end of 2017. Though Paul suffered plenty of consequences for his controversial video, including losing millions of dollars by his own estimation after YouTube pulled much of his advertising revenue, some on the internet will never forgive or forget Paul for posting perhaps the most infamous moment in YouTube history.

Which led Dolan to respond by tweeting, “Fuck[,] you REALLY know you made a mistake when even Logan Paul can tell.”