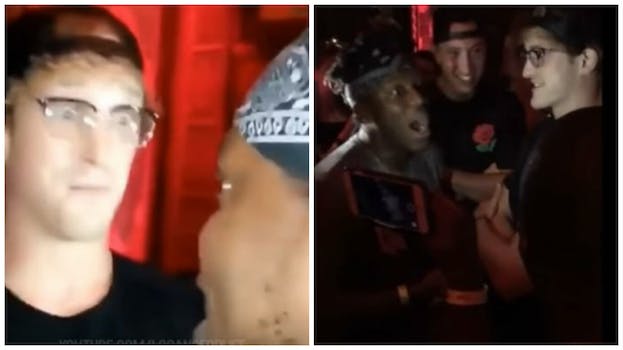 Watch Logan Paul, KSI get into verbal battle after running into each other at L.A. nightclub

'Every time I’m in front of you, I get less and less scared.'

YouTube stars Logan Paul and KSI are training (and knocking down sparring partners) for their Aug. 25 fight in the U.K., and on Saturday, they will participate in a Los Angeles press conference to sell their social media extravaganza.

And the two are already trash-talking to each other—in person.

The duo ran into each other at an L.A. nightclub on Wednesday, according to TMZ, and plenty of people caught the confrontation on camera. Paul commented on the size of KSI’s head (he said it was like a hot air balloon and a watermelon), that he couldn’t miss with his punches because of its girth, and that he could smell the stink off KSI’s ever-present bandana.

KSI, meanwhile, said Paul’s mother and father were “going to get it” and asked Paul if he was shaking, presumably in fear.

Paul responded by saying, “Every time I’m in front of you, I get less and less scared.”

Earlier this week, video was released of Paul knocking down a sparring partner during a training session.

The oddsmakers, though, haven’t been impressed. According to Skybet, Paul is a slight 6/4 underdog, meaning you’d win $150 on Paul if you wager $100.

KSI, who has 18.7 million YouTube subscribers, knocked out fellow YouTuber Joe Weller in front of tens of millions of online viewers in February. In the postmatch interview, he called out Logan Paul and Jake Paul. KSI and Logan Paul then had an extensive set of negotiations for a two-fight deal, and it was basically sealed when Paul (17.5 million subscribers) confronted KSI at a boxing gym in Las Vegas.

During that quick meeting in March, Paul told KSI, “Do me a favor. Get in the ring. Start training. Start sweating. Because I’m coming in hot with the guns, baby.” KSI declared he’d knock out Paul, and Paul responded by saying, “I hope so. Somebody’s got to do it. And somebody’s going to get knocked the fuck out, bro.”