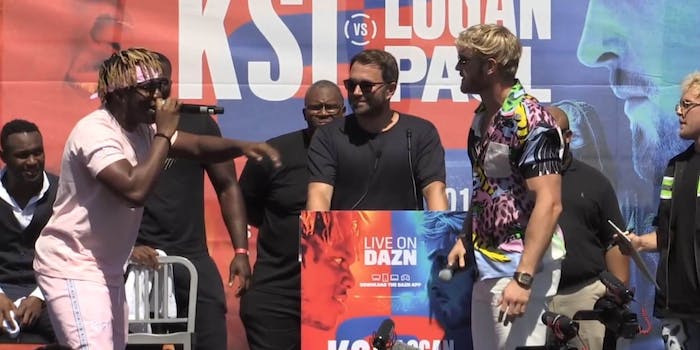 Logan Paul rips KSI for 5 abortions, and the internet is not having it

Did Paul go too far?

Whenever Logan Paul and KSI get together for a press conference, nastiness is sure to follow. KSI rips Paul for his Japanese forest suicide video that turned the world’s ire on the YouTube star. Paul says KSI is missing his penis. KSI makes fun of Paul’s girlfriend and his dad. Paul blasts KSI for sexually objectifying women.

But much of the internet got upset Monday during the London press conference to promote the second Paul vs. KSI fight that will happen next month in Los Angeles.

After KSI brought onstage a dog that had a striking resemblance to Paul’s late dog Kong, who was killed by coyotes in April, the press conference host, True Geordie, asked Paul for his response.

“I might kill this man,” Paul said as the London crowd booed him. “You may not know it but [KSI is] on his fifth abortion. His fifth. That’s five babies dead. And I think I might return the favor. And I might kill you. I might end you, man. I’m going to light you on fire, bro.”

KSI didn’t respond to the barb, which stems from internet rumors that he’s paid for abortions of romantic partners. Last year KSI’s brother Deji said as much in a diss track.

Twitter soon erupted in anger over Paul’s remarks. The backlash felt similar to when Paul joked on his podcast in January that he was going to “go gay” for the month of February.

A viral #loganpaulisoverparty hashtag was created, and others weighed in on the merits of mentioning abortion in that setting.

As one Twitter user wrote, “logan paul bringing up abortions as a ‘diss’ to ksi. please don’t use women’s *possibly traumatic* experiences as pawns to further ur shitty beef for clout. i’ve seen this a lot on youtube. it’s so GROSS.”

logan paul bringing up abortions as a ‘diss’ to ksi. please don’t use women’s *possibly traumatic* experiences as pawns to further ur shitty beef for clout.

i’ve seen this a lot on youtube. it’s so GROSS.

Another responded to that by saying, “he also called it murder ???? He’s so problematic.”

Another Twitter user wrote, “Logan Paul literally used footage of a dead person on a youtube video for all his 7 year old fans to see but abortion is where he draws the line?? brainless #loganpaulisoverparty”

Despite his previous claims that he would stop being so childish on YouTube and start acting more mature, it’s not necessarily in Paul’s best financial interests to do so. He and KSI will likely make oodles of money for their boxing rematch, and DAZN, which is streaming the fight, needs as many new subscribers as possible. Trash-talking will probably help that.

Yes, it’s a terrible and tasteless look if KSI brings up Paul’s suicide video or Paul rips KSI for alleged abortions. But in the name of promotions, those are oftentimes winning combinations.