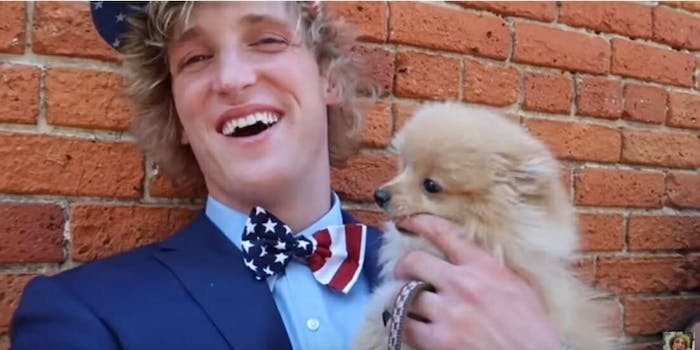 Paul does not get the benefit of the doubt.

When Logan Paul announced this month that a coyote killed his dog, even some of his bitterest online rivals expressed their sympathies toward the YouTube star. But much of that goodwill has disappeared, as some have since accused Paul of trying to monetize the death of his dog, Kong.

On Saturday, Paul tweeted the idea that he might make a diss track on coyotes. That only fed the slowly building online outrage that Paul was trying to cash in on Kong’s presumably violent death.

Almost immediately, people wondered why Paul was trying to profit.

milking the situation aren’t ya

Still working on that emotional depth thing, a' Logan?

Milking this whole situation… funny how people thought you changed.

Unsurprisingly, given that Paul garnered huge YouTube controversy by posting a video with a dead body at the beginning of 2018—and severely hurt his brand and his bank account in the process—some brought up that incident in their responses.

His Twitter poll also fed the criticism that some people had for Paul for placing ads on the video where he showed footage of coyotes stalking Kong at Paul’s Los Angeles residence and where Paul nearly broke down a couple of times talking about how much he loved his Pomeranian. The video has garnered more than 10 million views, which is the most engagement he’s had for a vlog in the past several months.

Kavos, who posts vlogs to talk about YouTube news and drama to his 1.1 million subscribers, was immediately disgusted by Paul’s poll.

I'm sorry but i really don't get this… your fucking pet died brutally and you are going to shamelessly use that for money and views. How is this normal? pic.twitter.com/iyrP9DtzWe

Kavos continued by writing, “I know people are saying ‘it’s a joke,’ but the guy monetized the video about his dog dying and honestly I would not put it past him. Maybe I’m wrong but I guess we will find out in the next few days.”

Naturally, Paul has his defenders on Twitter who told the critics to back off Paul and let him grieve how he needs to grieve—whether that’s through humor or through a silly music track. People also speculated that perhaps Paul is earmarking that ad revenue to donate to some kind of charity in Kong’s name. For the record, the poll that Paul posted on Twitter asking whether he should make a diss track shows 42% people saying “yes” and 58% of respondents saying “Fuck yes.”

Either way, we know that Paul has been so toxic in the past that many people aren’t going to give him the benefit of the doubt when it comes to YouTube and social media—whether he’s legitimately mourning the loss of his pet or if he’s trying to make a few bucks off of it.