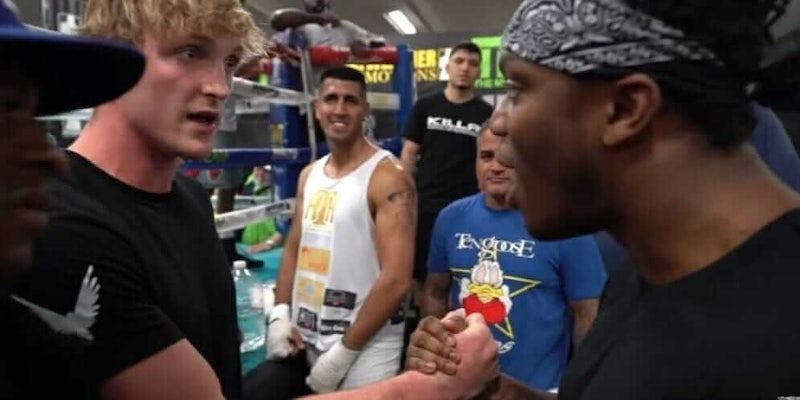 Logan Paul vs. KSI: Here’s why Paul is the slight betting favorite in the rematch

An oddsmaker breaks it down for us.

In the leadup to the YouTube boxing match between Logan Paul and KSI in 2018, Paul was declared the pre-fight underdog. For their second fight, which will take place Nov. 9 in Los Angeles in an event that can only be streamed on DAZN, Paul is now considering the betting favorite.

According to Dave Mason, the sportsbook brand manager for BetOnline.ag, it’s mostly because Paul is the better athlete.

“Logan started the [first] fight better and slightly faded toward the end (being his first boxing match),” Mason told the Daily Dot in an email. “However, he has a background in combat sport (wrestling) and is naturally the fitter athlete.”

That’s true, but KSI has slightly more experience in this type of big-time sports atmosphere. In the first-ever YouTube boxing extravaganza in February 2018, KSI knocked out fellow British social media star Joe Weller in the third round. He then called out Jake and Logan Paul, and eventually, a matchup between KSI and Logan Paul was signed.

In their bout, Paul started fast and won the first few rounds before he hit a wall of exhaustion. That’s when KSI took over and nearly ended the fight. In the end, it was declared a draw, and now they’ll meet up again in November. This time, neither will wear headgear, and both will use 10-ounce gloves, smaller and more dangerous versions of what they used in 2018.

While both talked trash about each other in the fight announcement press release and explained why they’re going to dominate their opponent, Mason said Paul’s natural size advantage and the fact he’s had another 13 months to train for the rematch could lead him to victory.

“Logan has had over a year to train for the second fight this time around so is seen as the slight [favorite],” Mason said.

To me, that makes sense. Paul should be seen as the favorite, and I think he’ll win this time because he’ll have a better sense of how to pace himself. But KSI still has a good chance to score his own victory, and perhaps if you really want to have a chance to make money on this fight, there’s always this option: Wagering on them to have another draw is an 8/1 bet.