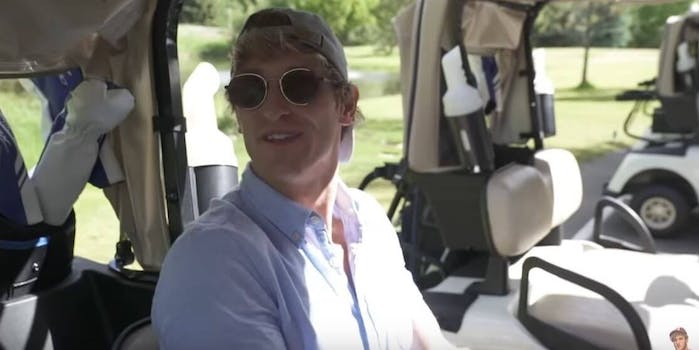 If 2019 was the year that Logan Paul first stopped caring about what his critics thought, he’s continuing that mindset in 2020 with a controversial Instagram post about the coronavirus.

The YouTube star, who has begun to turn away from the online platform that made him a social media star, is drawing criticism for a photo he uploaded on Wednesday that makes light of the deadly coronavirus and the global fear of a possible epidemic.

In his photo, Paul appears with four women, three of whom are wearing gas masks. As noted by Metro, the women are Instagram models Katie Bell, Julia Rose, and Daisy Keech, and adult film star Riley Reid. One is flipping off the camera, while a shirtless Paul, wearing the gas mask on his head instead of over his mouth, gives a big smile. The caption reads, “f**k the corona virus.”

For many YouTubers, there probably wouldn’t be much outrage over a photo like this. But Paul rarely lets a month go by where he’s not doing something controversial. And the coronavirus has infected at least 7,770 people and killed more than 170 people.

I hope both @jakepaul and @LoganPaul catch the coronavirus #inbredfucks

One person wrote in the Instagram comments, “I would actually celebrate” if Paul was infected, while another responded this way: “Not everything can be made fun of. F**ker.”

And yet another summed up how many observers were feeling: “People are dying from the coronavirus. Nothing to joke about. Guess he never learns.”

While Paul has talked about how he’s matured—and he actually drew praise earlier this week for calmly talking to a college student after she spit on him and then refused to apologize—he always seems to find himself back in online controversy.

Not that he cares at this point, especially since he’s still stained by the video from a Japanese suicide forest he posted two years ago.

“If I quit or got upset every time somebody questioned me [about Japan], it would affect me because I know I would have quit,” Paul told the Daily Dot in November. “I had to take a deep introspective dive and realize the only person who can change the path of my life is me. They can hop on with their cancel culture bandwagon if they want to. But it’s my fault if I listened to them.”

Clearly, Paul isn’t listening to any of his critics—even when his jokes are in poor taste.