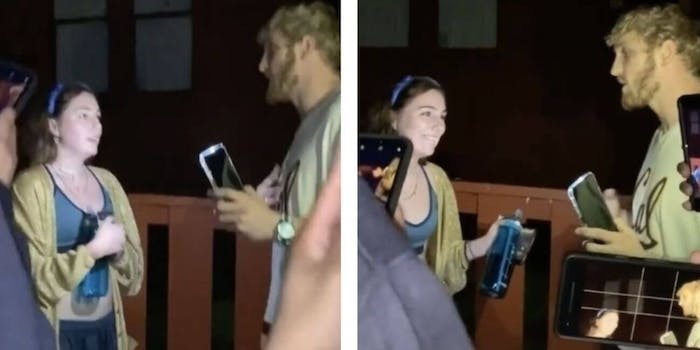 The story went viral on TikTok.

An apparent college woman who encountered Logan Paul this weekend spat on him while running by and then told him that she wasn’t sorry. But Paul, the controversial YouTuber who is seemingly involved with online drama nonstop, told the woman that he had nothing but love for her despite the fact she tried to degrade him for likes and online clout.

Afterward, the story went viral on TikTok, but the encounter actually showed Paul in a positive light.

As Paul was saying hi on the video, the woman, apparently a University of California-Berkeley student, recorded herself running next to him and spitting on him.

The video then cut to Paul and the woman talking with Paul saying, “I don’t think that’s what life is about.”

The woman said, “I’m sorry but not really.”

“Thank you,” the woman said. “I don’t really respect you that much.”

“All good,” Paul said. As at least one person around them chastised her for spitting on Paul, saying, “That’s not cool.”

The woman who spit at Paul also asked him if he liked her jacket.

“I do. I like everything about you,” Paul said. “But in the future, it’s not cool to spit on people.”

The TikTok of their meeting has more than 357,000 likes as of this writing, and many commenters have praised Paul for the way he handled the situation.

While the woman thought it was hilarious that she lobbed her bodily fluids onto another person while running the other way—and then took their ensuing conversation as a joke—here’s something to think about: When Logan Paul is the mature one in the confrontation, perhaps your priorities need to be reevaluated.