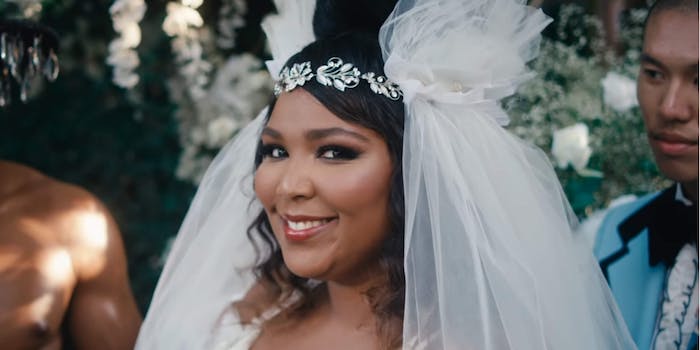 Lizzo responded to a separate plagiarism claim with a lawsuit.

Lizzo’s “Truth Hurts” is a certified hit two years after its release, but the singer has now officially credited a songwriter who claimed she came up with one of its iconic lines.

For more than a year, U.K. singer Mina Lioness has held up a tweet from February 2017 as proof that she originally came up with the line “I just took a DNA test, turns out I’m 100% that bitch,” though her tweet originally started with “I did a DNA test.” After Lizzo’s VMA performance in August, she again tweeted out her frustrations; in 2018, Lizzo responded to a tweet about the line but said she’d “never seen this before in my life” and that it was inspired by an Instagram meme.

On Wednesday, Lioness tweeted out her thanks to Lizzo’s “entire management team for embracing me and reaching out.” In another tweet, she added, “I just took a DNA test, turns out I’m a credited writer for the number one song on Billboard.”

I just took a DNA Test, turns out I’m a credited writer for the number one song on Billboard.

I have received nothing but love from her through our communications, so I truly do thank her.

Earlier this month, producers Jeremiah and Justin Raisen claimed that the melody of “Truth Hurts,” as well as the “DNA test” line, were taken from the song “Healthy,” allegedly written with Lizzo in April 2017. On Wednesday, Lizzo denied this, stating: “The men who claim a piece of ‘Truth Hurts’ did not help me write any part of the song. They had nothing to do with the line or how I chose to sing it.”

Their claim doesn’t seem related to Lioness’. In a statement posted to Instagram, Lizzo echoed that: “The creator of the tweet is the person I am sharing my success with… not these men. Period.”

Truth Hurts… but the truth shall set you free.

Lizzo’s lawyer told Pitchfork a lawsuit has been filed against the Raisens. Mina Lioness is now credited on the Wikipedia page for “Truth Hurts.”