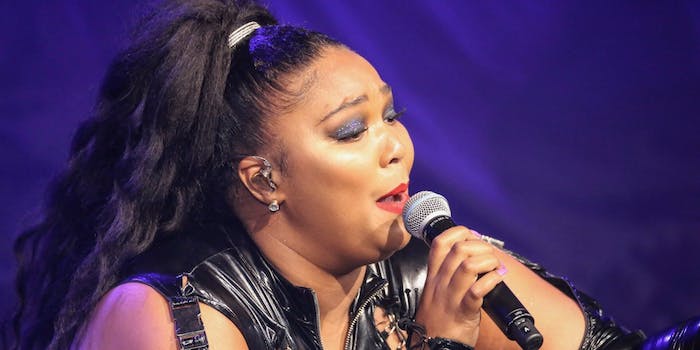 Since the year broke, the singer-rapper-flutiest has been capturing the attention of the internet with her catchy, female-empowering song lyrics.

And, after a performance of “Truth Hurts” at last weekend’s MTV Video Music Awards, Twitter users decided to turn one of the song’s most iconic lines into a pretty hilarious fill-in-the-blank meme where people report the results of their “DNA test”.

The original opening lyric, is “I just took a DNA test/turns out I’m 100% that bitch.” And it has been around for a long time because “Truth Hurts” was originally released in 2017, before becoming a sleeper hit this year after the release of Lizzo’s third album Cuz I Luv You.

The meme responses to the “DNA test” ranged from “I’m 100% dead” (courtesy of The Good Place‘s D’Arcy Carden) to the plot of Jane Eyre.

i just took a DNA test, turns out i’m 100% still gay and anxious

just took a dna test. turns out i’m only 19% that bitch on my fathers side

I just took a DNA test, turns out I’m 100% that governess you hired for your French ward, and now you’re in love with me, but you’ve got to do something about that wife of yours in the attic first.

I just took a DNA test
turns out I’m 100% pic.twitter.com/25uZMvkFWJ

I just took a DNA test, turns out I’m 100% a dumb bitch who believes every one has good intentions.

Even Busch Beer decided to get in on the meme.

“We just took a DNA test…turns out we’re 100% that Busch,” the account for the beer company tweeted.

Lizzo herself was pleased when she discovered her song lyric was trending, and she tweeted out to let her fans know how much she loved it.

“‘I just took a DNA test’ is trending rn and I love it haha,” she wrote.

“I just took a DNA test” is trending rn and I love it haha pic.twitter.com/P8hzzj1ILg

However, this isn’t the first time the DNA test lyric has become a viral meme challenge. Earlier in the year, users on TikTok released videos of themselves swabbing their mouths, then shouting their DNA test results.

Lizzo even teamed up with Spotify to release an actual test for users to take and find out if they are 100% that bitch. In the test, users upload a photo and then answer ten questions about their views on love, life, and happiness.

But the rapper, who has easily made a name for herself as one of the catchiest songwriters in the industry, is facing some backlash over the song lyric. Allegations have emerged which suggest that Lizzo and her team might have stolen the iconic DNA test lyric from a tweet that went viral years ago.

The tweet in question is from February of 2017, which is seven months before the original “Truth Hurts” was released in September of the same year.

“I did a DNA test and found out I’m 100% that bitch,” the tweet from user @MinaLioness reads.

Lizzo denied the allegations last year, but they have since resurfaced along with this new meme challenge.

She has yet to respond to the resurfacing of the allegations, but that’s probably because she’s too busy celebrating how iconic she has since made it.