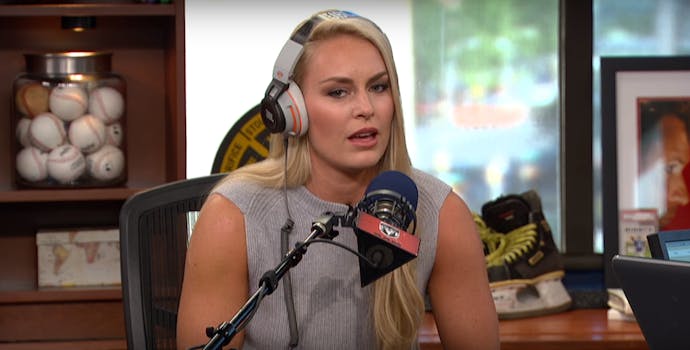 Some Americans are happy that Vonn lost.

On Saturday, skier Lindsey Vonn lost a chance at an Olympic medal after a mistake in the super-G. She finished sixth and tweeted about the loss, and the trolls immediately started pecking.

Frustrating to be so close to the podium and to have made such a big mistake…but that’s ski racing. I’m proud of the way I skied and how I attacked the course. I gave it my all and came up short. That’s life. Now it’s on to the Downhill! 💪🏻

This all started back in December when Vonn gave an interview to CNN. When asked, “How would it feel competing at an Olympic Games for a United States whose president is Donald Trump?” she responded: “Well, I hope to represent the people of the United States, not the president… I take the Olympics very seriously, and what they mean and what they represent. What walking under our flag means at the opening ceremony. I want to represent our country well. I don’t think that there are a lot of people currently in our government that do that.” She added that she would “absolutely not” visit the White House with other Olympians.

After Saturday’s loss, it appeared that people actually thought those words about Trump made her lose. And while many critics tweeted at her to keep her mouth shut and stop being political, they ironically made it political by making Trump the focus.

Remember when Lindsey Vonn said she wouldn’t go to the White House after the Olympics?

Turns out she didn’t win a single medal, so she wouldn’t have been invited anyway.

Vonn did have her defenders (like Ed Asner) and handled the troll mob with grace. “There’s, of course, going to be people that hate me and hope I ski off a cliff and die,” she told Sports Illustrated. “But you know, that’s fine. I’m not going to do that. It’s people sitting behind a computer and they will say anything. You take it for what it’s worth and at some point, you just laugh because it’s ridiculous.”

Americans rooting for members of Team USA to fail has become a theme this year. Besides Vonn, trolls have predictably gone after figure skater Adam Rippon and skier Gus Kenworthy—who are both gay—after comments about Trump and VP Mike Pence’s anti-LGBTQ policies.

Tomorrow is another day and another opportunity to become better. Goodnight ❤️🙏🏻

Vonn races the downhill on Tuesday night, for which she could still land a medal.