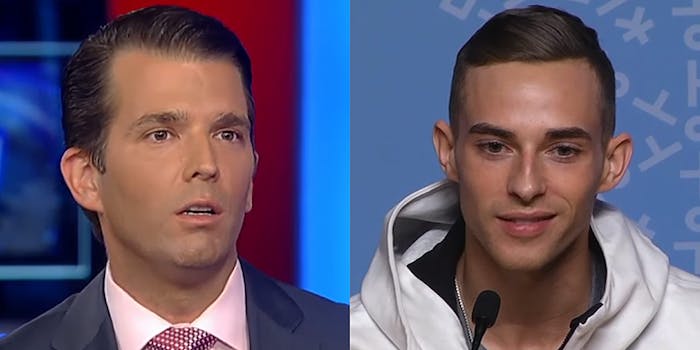 Of course Trump Jr. would join in.

If you thought the president’s loudest son wouldn’t insert himself into the Olympics biggest fight, then you don’t know Donald Trump Jr.

Over the past few weeks, U.S. Olympic figure skater Adam Rippon has been feuding with Vice President Mike Pence, after Pence was chosen to lead the Olympic delegation in South Korea. Rippon spoke out against Pence’s strident anti-LGBTQ stances

When Pence attempted to arrange a meeting to talk to Rippon, Rippon said he wouldn’t speak with Pence.

Since then, the feud has mostly simmered beneath the surface, until Trump Jr. spoke up today about Rippon saying he didn’t want his Olympic experience to be about Pence.

Really? Then Perhaps you shouldn’t have spent the past few weeks talking about him. I haven’t heard him mention you once??? https://t.co/8lcCsoyBsq

Adam Rippon: I don't want my Olympic experience to be "about Mike Pence" https://t.co/niNW0hQwFj pic.twitter.com/NikLFqqivt

A cursory glance at Pence’s tweets would show that is false. Pence mentioned Rippon, while twice invoking one of Trump Jr.’s favorite phrases.

.@Adaripp I want you to know we are FOR YOU. Don’t let fake news distract you. I am proud of you and ALL OF OUR GREAT athletes and my only hope for you and all of #TeamUSA is to bring home the gold. Go get ‘em!

Headed to the Olympics to cheer on #TeamUSA. One reporter trying to distort 18 yr old nonstory to sow seeds of division. We won’t let that happen! #FAKENEWS. Our athletes are the best in the world and we are for ALL of them! #TEAMUSA

The dispute comes over whether Pence supported funding for conversion therapy for LGBTQ individuals. Rippon said he wouldn’t meet with someone who funded those programs like that, which have been widely discredited.

Though Pence says he never supported conversion therapy, he campaigned on it in 2000. saying he only supported money for HIV care going to “institutions which provide assistance to those seeking to change their sexual behavior.”