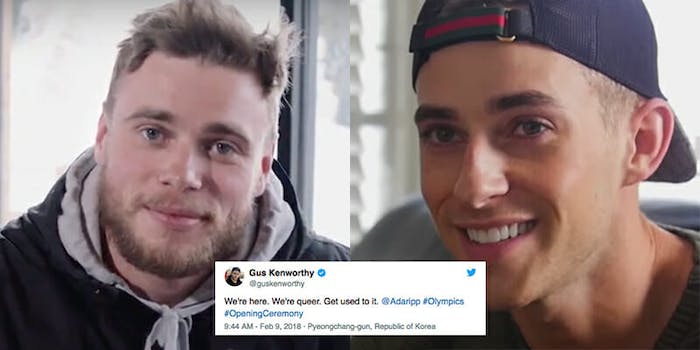 Gay Olympians to vice president: ‘Eat your heart out, Pence’

Figure skater Adam Rippon and freestyle skier Gus Kenworthy are the first openly gay athletes to compete for Team USA. They’ve both made clear they aren’t happy with Pence’s selection to lead the U.S. delegation to the opening ceremony, and the two doubled down on their criticism with cheeky social media posts on Friday.

“The 2018 Winter Olympic Gaymes are officially under way!” Kenworthy wrote on Instagram. “I’m so proud to be representing the LGBTQ community alongside this amazing guy! Eat your heart out, Pence.”

Rippon tweeted Friday that “representing the USA is one of the greatest honors of my life and being able to do it as my authentic self makes it all so much sweeter.”

Kenworthy posted a photo collage of him and Rippon on Twitter, writing, “We’re here. We’re queer. Get used to it.”

The posts came two days after reports that Rippon declined the offer of a special meeting with Pence, saying the vice president “doesn’t stand for anything that I really believe in.” Pence reportedly asked the U.S. Olympic Committee to set up a meeting between him and the figure skater because Rippon called out his support of “gay conversion therapy.”

Pence’s press secretary denies that Pence ever supported gay conversion therapy. But Pence’s congressional campaign website at one time said he supported the use of federal funding to treat people “seeking to change their sexual behavior.” In 2006, he said marriage equality would end in “societal collapse.” And President Donald Trump once reportedly “joked” that Pence wanted to “hang” all LGBTQ people.

“I would absolutely not go out of my way to meet somebody who I felt has gone out of their way to not only show that they aren’t a friend of a gay person but that they think that they’re sick,” Rippon told USA Today.

On The Ellen DeGeneres Show Monday, Kenworthy said Pence seemed like a “bad fit” to lead the U.S. delegation.

“I feel like the Olympics is all about inclusion and people coming together, and it seems like it’s not really doing that,” Kenworthy said.