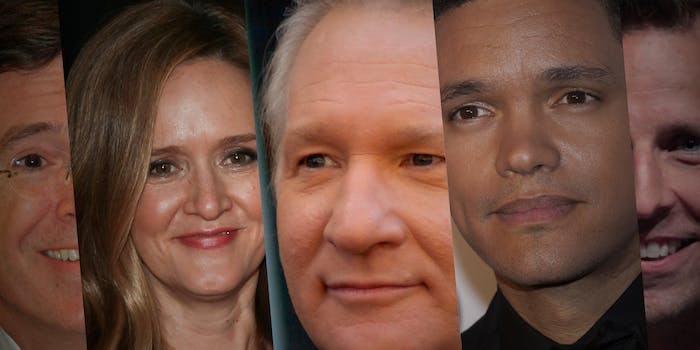 How did the late-night hosts do at the DNC?

From Bee to Noah, the gang made it their own.

When Samantha Bee, Stephen Colbert, Bill Maher, Seth Meyers, and Trevor Noah descended upon Cleveland last week for the Republican National Convention (some live and some literally, but all of them with their material), the task was pretty simple yet daunting: Try and make sense of the whole thing.

And the RNC provided plenty of disastrous opportunity for that. It was a convention where Melania Trump’s plagiarism and Ted Cruz’s refusal to endorse stole the spotlight from a week that was supposed to be all about Donald Trump, who eventually made his own appearance marked with reactions of mockery and fear. But the Democratic National Convention, which concluded Thursday night with Hillary Clinton’s historic acceptance speech, provided late-night hosts with just as daunting a task on a completely different scale.

It’s probably safe to say that professionally speaking, Bee, Colbert, Maher, Meyers, and Noah aren’t exactly fans of Trump; Meyers’s disdain for Trump in particular dates back to at least 2011. Since he announced his run last year, Trump has become increasingly difficult for late-night TV to turn into a punchline when many of his headlines and quotes are in #NotTheOnion territory, and no amount of “evisceration” had an effect on Trump’s polls—not even Oliver coining the Republican presidential nominee “Donald Drumpf” or Stewart’s live takedown after Trump’s RNC speech last week.

The DNC was full of its own controversies too even with the noticeably more positive reaction to Clinton. Wikileaks released the DNC email leaks just before the start of the convention and Bernie Sanders supporters who refused to support Clinton (and claimed censorship) made their displeasure known, even during key speeches.

Late-night hosts might not have to be as objective—as Jon Stewart (and more recently John Oliver) pointed out, he’s a comedian, not a journalist—and while some of them have hosted candidates in both parties on their shows, they’re not holding back in their political critiques.

“It’s embarrassing that this even a contest,” Noah said about the impending general election matchup, already anticipating any backlash he might receive about objectivity.

But how did they do this week? For the most part, much of what they did on TV was similar to the RNC, but they still each made it their own. Here’s what worked—and what should come next.

Colbert brought out the big names—mainly Stewart—last week for the shit show that was the RNC, but this week he was mostly on his own with himself and himself.

After months of unevenness on The Late Show, he finally brought out the “Stephen Colbert” character from The Colbert Report to raucous applause and millions of YouTube videos. But the issue of whether that character would take over The Late Show soon had its answer: Colbert told his audience that due to corporate lawyers he could no longer embody the “Stephen Colbert” persona. Luckily he had a subtle enough solution while pretty much playing the same character. Right now? We’ll take it.

Colbert has emerged victorious from the convention circuits, but he still has a lot of work to do to earn back the love and trust of his audience. His show’s two most popular videos have nothing to do with him—those are currently Stewart’s takedown and Laura Benanti’s Melania impression—and he’s got a lot of work to do. Fortunately, it looks like he can handle it.

Seth Meyers debuted a new segment as a wake-up call

Meyers’s “A Closer Look” segments whittled down political headlines into informative and entertaining segments for months, making him must-see TV for both comedy and politics fans. And sure enough, he had them daily throughout the RNC and DNC.

But his most successful segment of the week might’ve been a new one. Meyers debuted “Hey!” on Tuesday’s show after the Bernie or Bust camp protested Clinton’s nomination. It has shades of “Weekend Update’s” “Really?!” as he lays it out plainly for Bernie’s supporters at how

Will it convince them? It’s unlikely, but it must’ve been nice for him to get it off his chest.

Looking back can be as effective as looking ahead

While the other late-night hosts focused their efforts on the DNC, Bee’s Full Frontal, which airs Monday nights, still focused on the RNC. Since she didn’t have a special episode airing on Wednesday like she did with the RNC, we’ll have to wait until next week to see what kind of shenanigans she has planned.

But that doesn’t mean she still didn’t create a great show. With more time, Bee and her crew can give the political arena the attention and bewilderment it deserves.

Sometimes, just let the people talk and they’ll create the magic for you.

And even before the DNC started, Bee got TBS to apologize for a bad Clinton joke it made, so she got another victory under her belt.

The late-night coverage at the conventions this year was unprecedented, but at the end of the day some of them still had to put on a show.

Colbert and Meyers have the most traditional late-night shows out of the bunch, and once they finished their DNC coverage on their live shows, they still had to interview and cater to celebrity guests in promotion mode, show a musical guest, and maybe even include an extra bit or a sketch. Light-hearted as some of them might be, it can throw a wrench into the entire flow of a show.

Maher, Bee, and Noah host mostly, if not entirely, politically focused shows and don’t have to worry about crossing off certain points of a format.

We don’t know yet if the extensive and often live coverage from late-night will come into play for future and major political events, but come election night, just let these comedians do what they do best.