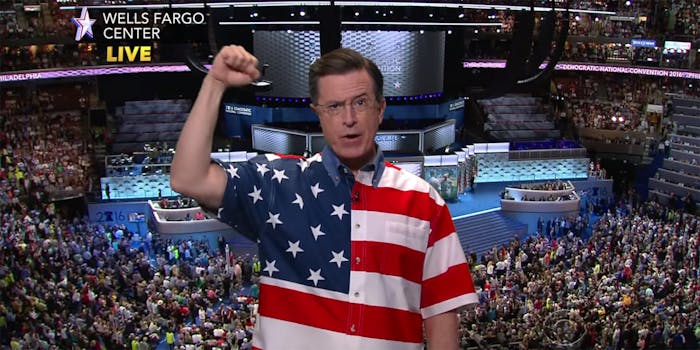 Meet the other other 'Stephen Colbert.'

Bringing back the “Stephen Colbert” character to The Late Show was always going to be a risky move for Colbert, who spent his show trying to distance himself away from it. But come the Democratic National Convention, he had a clever solution for not letting “that guy” take over—or at least the corporate lawyers did.

Colbert can’t bring back “Stephen Colbert” again due to intellectual property agreements (no, he doesn’t own the rights to his face and name), so he did one better. He went out to “‘Stephen Colbert,’” “Stephen Colbert’s” identical twin cousin, on the floor of the DNC, and you know what? I think he’s gonna fit in on this show pretty well.

Just add in Colbert’s new segment, “The Werd,” and you’ve got a bit unique and fun enough to get past the corporate lawyers.