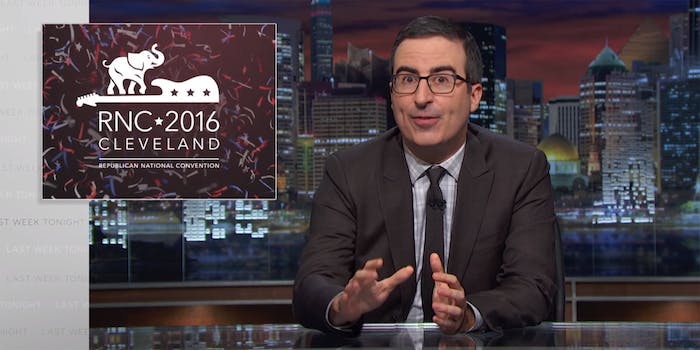 John Oliver tried to make sense of the RNC

'The economy is about numbers, feelings are supposed to be irrelevant.'

While many of his late-night colleagues opted to cover the RNC throughout the week, Oliver instead broke down the often-chaotic atmosphere of Cleveland in his usual weekly time slot. He called it “the most apocalyptic thing ever to happen to that city—and bear in mind their river has repeatedly caught fire,” and in-between the antics and rhetoric of the speeches, Oliver highlighted how some politicians at the RNC, including Newt Gingrich, hold the belief that something can be true because someone feels it.

“I think we can all agree that candidates can create feelings in people, and what Gingrich is saying is that feelings are as valid as facts,” Oliver explained. “So then, by the transitive property, candidates can create facts, which is terrifying, because that means someone like Donald Trump can essentially create his own reality, and that is the closest thing to an actual magic spell I have ever seen.”

We’ve got an entire political convention after this, so buckle up.