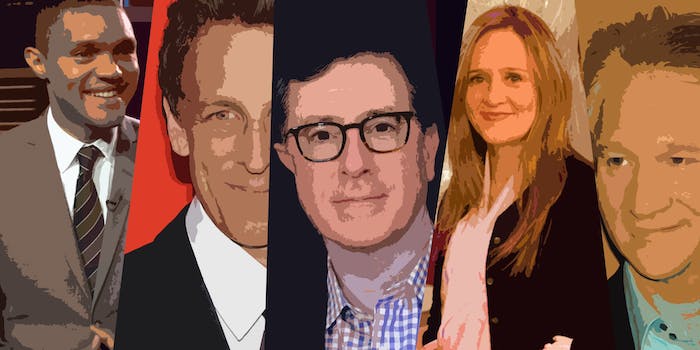 How did the late-night hosts do at the RNC?

The laughs after the convention.

The 2016 Republican National Convention was unique and unprecedented in spectacle. As speakers stole the spotlight from presidential nominee Donald Trump—whether by accidental plagiarism or in a more calculated move that might’ve also been political suicide—it’s only fitting that late-night television followed suit.

It wasn’t always that way. During the immediate aftermath of the 2000 presidential election, Jon Stewart, only about a year into his run on The Daily Show, completely changed the late-night game. In a series of segments called “Indecision 2000,” he and his team of correspondents put things into perspective for viewers, made them laugh and cry, and it’s what ultimately put Stewart on the map.

The Daily Show had an influential presence during every election, including the RNC and Democratic National Conventions, but this year it’s not alone. Trevor Noah is leading the Daily Show, but four other late-night shows dived in head-first for their own convention coverage this week in Cleveland and next week in Philadelphia.

Some made special episodes about the RNC on days they didn’t normally air like Bill Maher and Samantha Bee, who’s covering her first convention as a late-night host. Some, like Maher, Seth Meyers, and Stephen Colbert, are creating live shows to directly react to what just happened—something they normally don’t get to do because shows tape earlier in the day. Noah took his show directly to Cleveland and Philadelphia; his Thursday show aired live.

They all tried to comprehend the circus with plenty of jokes along the way, but for these politically savvy hosts and their tireless writing staffs, it’s a long way until November. How did they do this time around? Let’s take a look.

Bee isn’t a novice to the convention circuit (and circus), having covered it for years with The Daily Show. But this is her first time leading the coverage just five months after launching Full Frontal. She’s beloved by viewers and critics, who’ve praised her and deemed her “the natural heir to Jon Stewart” for months now.

She made a grand entrance to Cleveland in Herman Cain’s former presidential bus, but not before stopping along the way in Pennsylvania to talk to regular Trump supporters and fellow Republicans. Those interviews showed the kind of humor and hypocrisy well-known on The Daily Show, but it also humanized them as well as those in power. Take, for instance, Rep. Jim Christiana (R-Penn.), who said that Bee’s suggestion that “we’re stuck with this shit sandwich, let’s eat it” was a “fair way to characterize” what he said about the current political climate. Plus, it’s a true test for Bee and her staffers, who are literally stuck together on Cain’s bus.

Her bits back in her own studio aren’t to be overlooked. It’s there that she can stretch her comedy limbs and take on the RNC with as much absurdity as she believes they deserve. (Spoiler: It’s a lot.)

We can’t wait to see what she has planned next next week.

Did she go to Cleveland? Yes.

Most popular video: “The Not- Ready-For-Primetime Party“

We’re only 10 months into Colbert’s (admittedly uneven) run at The Late Show, but his return to the RNC after his Daily Show and Colbert Report days was already framed as a comeback—one that was mostly a resounding success. And it’s largely because he leaned back on what worked before.

He made headlines before the RNC even begun, both for using the Stewart trump card (Stewart is a Late Show producer) and for taking the stage as Julius Flickerman, the Hunger Games-esque character he debuted to mourn the loss of every presidential candidate, to denounce Trump. But it was his coverage itself that latched people back on the Colbert train.

He brought back Stewart’s grumpy voice of reason and “Stephen Colbert,” who we haven’t seen since The Colbert Report ended in 2014, to try and make sense of everything. Stewart came back to do some eviscerating of his own. Colbert struck gold with Laura Benanti pulling off a hell of a Melania Trump impression to plagiarize other quotes while apologizing for her own plagiarism.

Colbert is back, but will it last? For 10 months he held back on bringing the “Stephen Colbert” character out of his bag of late-night tricks, but now that card will always be on the table—and it could be a tempting one if it results in great ratings and social media engagement.

Did he go to Cleveland? Yes.

Most viewed video: “Melania Trump Did Not Plagiarize Her RNC Speech“

Maher’s show airs on HBO, which normally isn’t accessible to watch without a cable or HBO Now subscription, but for the past two nights Real Time streamed live on YouTube. It’s more or less the show you expect, but the live aspect allowed Maher and his guests to discuss aspects such as Trump’s acceptance speech in real time.

Maher’s shows aren’t cut up into segments like other hosts, so set aside some time if you want to dive in.

Did he go to Cleveland? No.

Over the past two years, Meyers transformed from your average late-night variety show host into a great political comedian. His staff works at lightning speed so Meyers can deliver one of his near-daily “A Closer Look” segments. Like Maher before him, Meyers on the RNC is very similar to Meyers on most days—the live aspect, including the appearance of his guests, is a major difference.

His “Closer Looks” this week are just as smart and funny as always, and they showcase just how much his staff is dialed in considering the amount of time they have to put everything together. But unlike most of the other hosts, Meyers still has a late-night show to run, so between the political focus he weaves in his nightly guests—sometimes they can create some gems to distract us from the political landscape, such as Meyers and Leslie Jones cooking seafood live on national TV.

Did he go to Cleveland? No.

Most popular video: “Who Is Mike Pence? A Closer Look“

Noah is still in his first year as host of The Daily Show, but he arguably had the biggest shoes to fill. He’s still trying to figure his show out during a mammoth campaign, and the unevenness has made more than one person reminisce fondly on Stewart. (It took some time, we should note, for Stewart to even become the fake news anchor we sorely needed.)

His live show may have gone off with a couple of hiccups along the way, but The Daily Show is a well-oiled machine that shines with host commentary (his take on New Jersey Gov. Chris Christie’s speech is particularly scathing) and contributions from his team of excellent  correspondents—especially standout Roy Wood Jr. The Daily Show was on the ground more so than any other show and it showed.

Did he go to Cleveland? Yes.