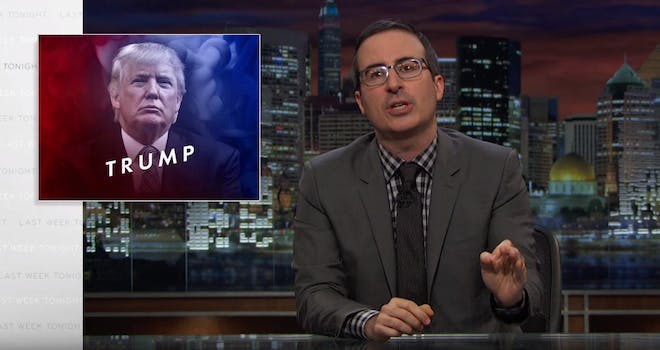 'You are either a racist or you are pretending to be.'

Donald Trump‘s dominance of the Republican presidential primary, with wins in three out of the four state contests, has sent a shockwave through the party establishment and sparked furious efforts to defeat him. But on Sunday night, a late-night comedian, not a sophisticated political operation, unveiled the most aggressive, comprehensive effort so far to puncture The Donald’s image.

In a sweeping 22-minute segment on Last Week Tonight, John Oliver methodically and brutally dismantled each of Trump’s selling points, from his toughness to his business acumen and from his policy knowledge to his lack of campaign contributions.

“For a tough guy,” Oliver said in one of many remarks aimed squarely at Trump’s ego, “he has incredibly thin skin.”

At another point, he charged, “You are either a racist or you are pretending to be.”

The Republican National Committee may never love the liberal, conservative-bashing Oliver as much as they love him right now.