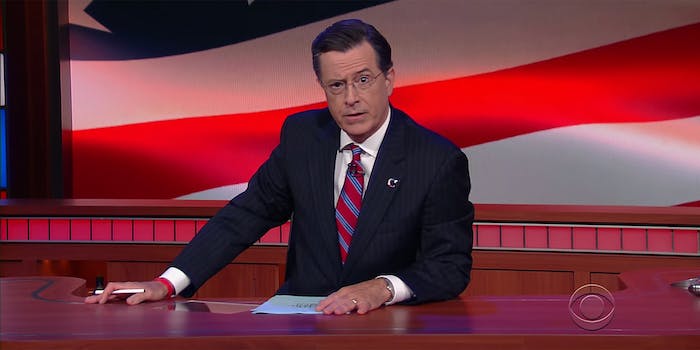 Stephen Colbert resurrected a ‘Colbert Report’ bit for the RNC

For months, Stephen Colbert has tried to escape the shadow of himself—the satirical right-wing alter ego he perfected on The Colbert Report—as he settled into The Late Show with varying degrees of success and failure. But now that the Republican National Convention is upon us, Colbert is finally taking “Stephen Colbert” out of his comedic arsenal.

We already knew that Colbert’s time at the RNC would be full of antics, and we saw those as he brought his Julius Flickerman character (a riff on the Hunger Games announcer) with him and took over the stage. He even brought Jon Stewart out of late-night retirement to make sense of everything.

But even “Stephen Colbert” can’t make sense of what’s going on.

“Stephen Colbert” is back, and he’s got a hard dose of truthiness in a revival of “The Word” all about Donald Trump. It’s just as glorious as we remembered.

But the return of the Colbert Report personality does lend itself to a bigger question. Now that Colbert let Colbert out of the bag, will he be able to put him back in, or will that continue to hang over The Late Show?