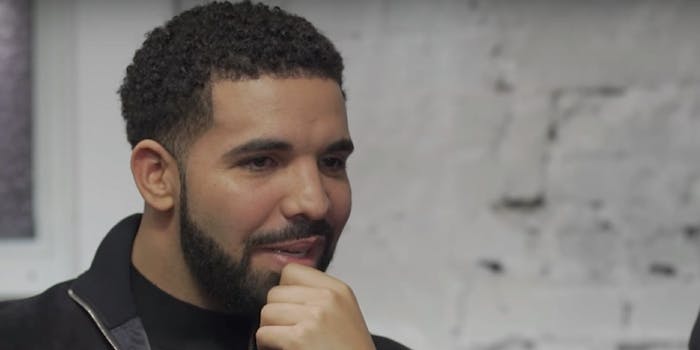 Drake is apparently collecting Birkin bags for his future wife

Is this romantic or creepy?

Drake has been saving up for that special someone.

The rapper told the Hollywood Reporter this week that he’s been hoarding a stash of Hermés Birkin handbags to gift to “the woman I end up with.”

It’s unclear how many of these hedonistic status symbols—ahem, accessories—Drake has saved away. But just one would be an extravagant purchase, as Birkin bags can retail anywhere from $5,000 to $30,000.

The revelation caused a wave of social media backlash.

This may be the most Drake thing I've ever read. https://t.co/0WhFTO0S4b

It’s no surprise that Drake would do this. He’s pretty much an emotionally vulnerable wreck most of the time (aren’t we all?). Many would argue that’s what makes him a great artist. Also, Drake seems a little insecure—this is the same rapper who thinks he’s an NBA player, after all.

Honestly, it would be totally fine—celebrated, even—if it came to be that Drake is collecting all these ridiculously pricey purses for himself.

Drake should just admit that he loves Birkin bags for himself. No shame!

It would be less fine if he thinks this is how he’s going to woo Rihanna.

AS IF RIHANNA CAN'T GET HER OWN DAMN BIRKIN BAGS pic.twitter.com/m1mFltqpSQ

And actually, writer and pop culture critic Roxane Gay doesn’t think that collecting luxury purses for your future spouse is fine at all.

Gay brings up some good points. What if the woman Drake ends up with doesn’t care about Birkin bags at all? Where is the line between sweet and creepy?