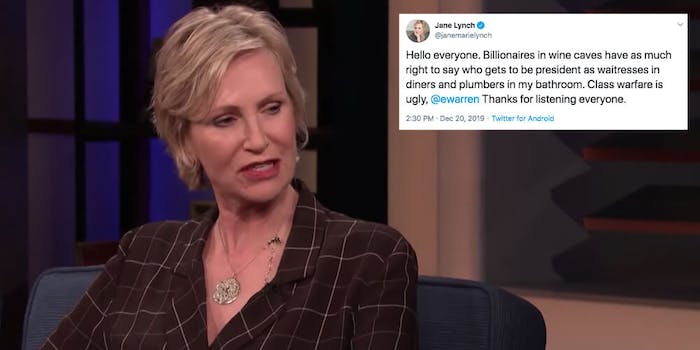 Jane Lynch dragged for her defense of ‘billionaires in wine caves’

The millionaire then asked 'HOW DO YOU STOP A TRENDING.'

Jane Lynch, a millionaire, tweeted in defense of billionaires–and it’s not working out so great for her.

“The mayor just recently had a fundraiser that was held in a wine cave full of crystals and served $900-a-bottle wine,” Warren said at the debate. “Think about who comes to that.”

Buttigieg’s event was held at the Hall Rutherford wine caves in Napa Valley and hosted by billionaires Craig and Kathryn Hall.

“He had promised that every fundraiser he would do would be open-door, but this one was closed-door. We made the decision years ago that rich people in smoke-filled rooms would not pick the next president of the United States,” Warren said.

It’s the norm that candidates vying for political office often pander to wealthy potential donors to help finance their campaign. Warren’s campaign has resisted in doing so. Sen. Bernie Sanders (I-Vt.) also took aim at Buttigieg and former Vice President Joe Biden for receiving contributions from billionaires at the debate.

While many voters expressed discomfort with Buttigieg’s strategy, the Glee actress was not among them.

“Billionaires in wine caves have as much right to say who gets to be president as waitresses in diners and plumbers in my bathroom,” she tweeted on Friday. “Class warfare is ugly, @ewarren.”

Hello everyone. Billionaires in wine caves have as much right to say who gets to be president as waitresses in diners and plumbers in my bathroom. Class warfare is ugly, @ewarren Thanks for listening everyone.

In theory, yes, billionaires in wine caves and waitresses and plumbers would all have equal weight in choosing the next president. However, as many online pointed out, that is simply not the case.

“The problem is—which is clear when Warren talked about it—that billionaires in wine caves have *substantially* more say in the process than waitresses and plumbers,” one user responded.

Another wrote that it is ignorant to believe the top 1% getting “on-demand access to politicians” is a real democracy.

Yes, "class warfare" is quite ugly.

And the ultra-rich should stop fighting the war.

Imagine believing it's normal and good for people who make up .001% of the population to have personal, on-demand access to politicians that average people aren't given. Imagine believing that's democracy.

smh embarrassed for you.

Maybe the problem is that the ultra wealthy and their companies have too much say in policies and who gets elected to enact them.https://t.co/CkKwj8RtA5

“What we’re seeing in this election cycle is that too often times in politics, money still talks. People can basically buy their way on to the debate stage. They can buy increases in polling very quickly when you dump $100m on TV ads.”
–@juliancastro

My 65 year old dad just saw this tweet for the first time at dinner and said “tweet her this: OK, Boomer.”

Lynch, who has donated to the Buttigieg campaign and hosted events for him herself, followed up by insisting that she understands what Warren was saying, she just doesn’t like “the delivery system.”

Suggesting that having a private meeting in a wine cave in itself isn’t class warfare against the common person is asinine and helps the elite.

I honestly don't get what part of "don't sell access" they don't understand.

Lynch allegedly then tweeted “HOW DO YOU STOP A TRENDING” after her tweet went viral for all the wrong reasons.

She just deleted this and I will never stop laughing pic.twitter.com/7tTVwjneCg

But, as the sides are drawn, there’s at least one thing Lynch has said that we can all agree on: The wine cave memes are back. She might’ve even created a new one with her very Boomer “HOW DO YOU STOP A TRENDING” line.

And the dying embers of what was the wine cave meme is gently blown back to life.