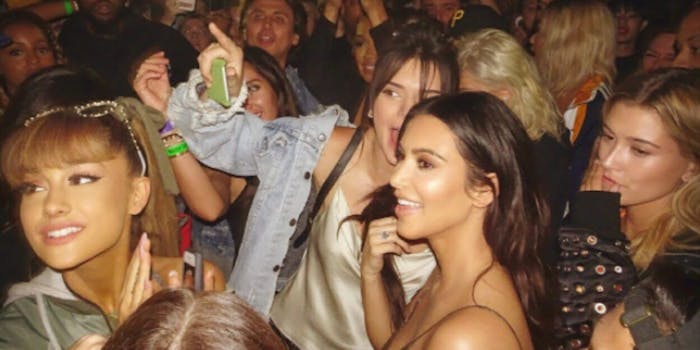 Kim Kardashian deleted a tweet from Tuesday afternoon about the explosion at Ariana Grande’s concert Monday night, after receiving backlash for its content.

Dozens of celebrities used Twitter to send out love and prayers for the victims of the explosion at Manchester Arena, which left 22 dead and dozens more injured. Unlike other celebrities, however, Kardashian included a photo of herself having fun with Grande.

“Concerts are supposed to be a place where u can let loose & have fun,” Kardashian tweeted. “So scary to not feel safe in this world. @arianagrande I love you.”

Many users on Twitter said they felt the tweet was both narcissistic and tone-deaf. Some disagreed, however, and saw the tweet as a way for Kardashian to support Grande.

The need for you to post a pic of yourself…disgusting

Children died, and you are posting a picture of a party, parents are crying for their child, you are safe with ur armed gardes #hypocrisy

After receiving plenty of backlash, Kardashian deleted the tweet later in the afternoon. Her Twitter now shows only two other tweets she posted Tuesday morning.

I'm praying for everyone in Manchester. This is truly so senseless & heart breaking.

Despite deleting the initial tweet, users are still tweeting to her angrily.

“We’re never going to forget when you posted an inappropriate pic and made the #Manchesterbombing all about you,” one user tweeted. “Screenshots are forever.”

We're never going to forget when you posted an inappropriate pic and made the #Manchesterbombing all about you. (Screenshots are forever.) pic.twitter.com/lsZlptqWio

Kardashian isn’t the only individual to receive viral attention for their tweets after the Manchester explosion. David Leavitt, a freelancer for CBS and Yahoo, according to his Twitter bio, tweeted a terrible joke Monday night that caused widespread anger on the internet.