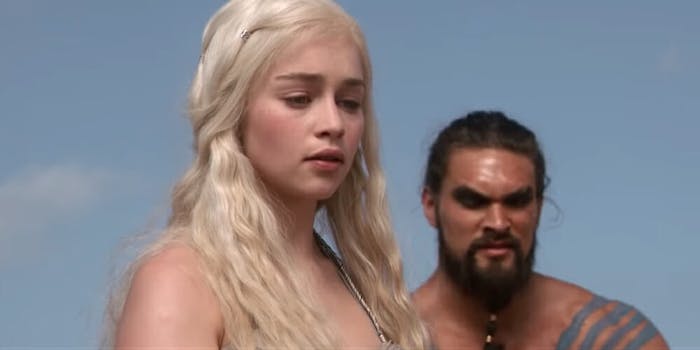 Jason Momoa, aka Khal Drogo, live streamed himself watching the Game of Thrones finale on Instagram. His reactions to Daenerys Targaryen’s scenes are so pure.

JASON WATCHING THE FINALE IS THE BIGGEST MOOD pic.twitter.com/f0jw4PNnS7

In the season’s penultimate episode, Daenerys burnt King’s Landing, full of innocent civilians, to ashes. Fans were beyond upset, claiming the showrunners abandoned Daenerys’ character development that’s been years in the making.

Many fans, who wanted to see the Targaryen end up on the throne, turned their backs on her after the episode. One fan and former on-screen husband didn’t. In fact, Momoa is so loyal to his Khaleesi that he reacted to that scene by saying, “Get ’em! Kill them all.”

He also expressed his hatred for Jon Snow while watching the finale.

Drogon, Daenerys’ last living dragon child, melted the coveted iron throne instead of Snow–essentially blaming the throne for her death.

He also wasn’t happy when he learned Snow’s lenient punishment for killing her was to be sent back to the Night’s Watch.

“Let me get this straight, you’re going back to what the fuck you did in the first place and you killed Khaleesi. Oh my god!” he said.

Momoa obviously wanted Daenerys to end up on the throne. So he, like most viewers, wasn’t happy that Bran Stark was the one who ended up being crowned king.

Momoa’s character on the HBO series was killed off in the first season, but he will forever live on as the number one Daenerys Targaryen stan.