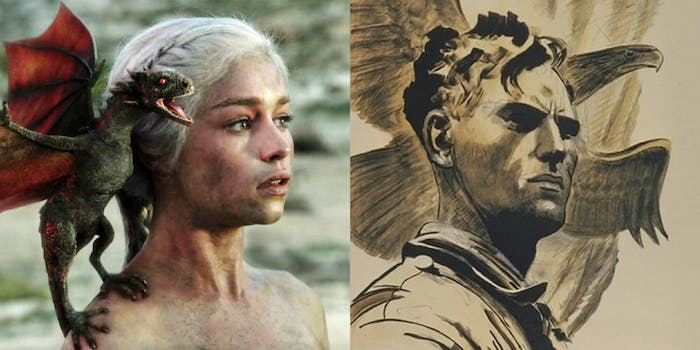 Knock Game of Thrones all you want, but you have to admit that season 8’s cinematography has been on point and then some. Whether it’s the hordes of undead clawing their way up Drogon’s back (which gave me serious Dark Souls vibes) or the shots of Drogon flying over King’s Landing (it’s mostly just Drogon this season, huh?), give that director of photography an Emmy. But some of Game of Thrones’ most iconic scenes featuring Daenerys Targaryen actually appear to have some remarkable parallels to Nazi war propaganda.

According to Tumblr user FedonCiadale, many of Dany’s most recognizable scenes resemble the work of Leni Riefenstahl, a German dancer, actress, and film director most widely known for her work creating propaganda films in support of the Nazi regime. Her most infamous work would likely be Triumph of the Will, a nearly two-hour long propaganda piece designed to tout the immense strength of the Nazi war machine and German spirit. Some of its most iconic shots feature massive crowds of Nazi soldiers and German citizens listening to Adolf Hitler speak, along with immediately recognizable Nazi iconography.

So how does that compare to the Mother of Dragons? FedonCiadale received some help from another Tumblr user named “une-nuit-pour-se-souvenir,” who lined up certain shots from Game of Thrones with shots from films like Triumph of the Will and other propaganda to illustrate FedonCiadale’s point.

To be fair, there are a number of shot comparisons that make enough sense to be compelling. The film student in me thinks that many of those shots might just be the result of a fairly common artistic direction for blockbuster films. Heroic figures are shot from below to look taller and stronger, aerial shots let the audience know the scope of a battlefield, and just like with most leaders, shots of an adoring crowd reaching out signal what kind of relationship a leader has with her people.

That said, a couple of shots really do give off an evil Nazi-esque vibe. Dany standing before the Unsullied in front of the Red Keep, while a fairly typical shot, does still have that darkly fascistic tone to it. Seeing the Unsullied directly compared to Nazi soldiers in full military regalia isn’t that impressive (the Unsullied have pretty much always worn black armor), but the panning shots of Dany walking through the middle of her army, or the Targaryen banner flying on top of a tall fort are pretty dang close.