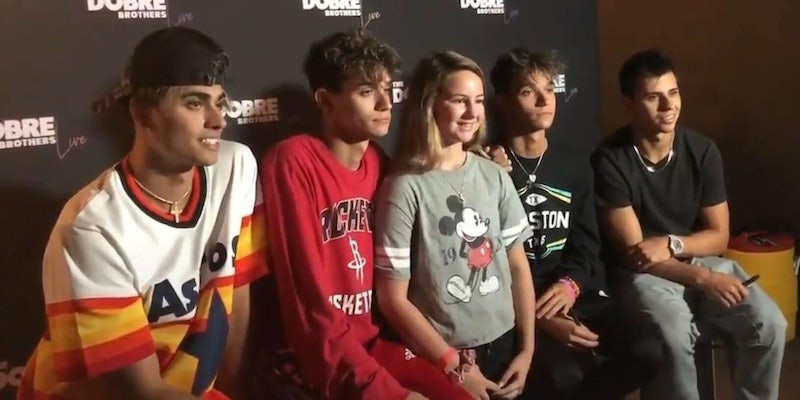 The Dobre Brothers faced plenty of criticism earlier this month for their apathetic attitude toward a fan who paid an exorbitant fee to meet them in person. Now, even controversial beauty vlogger James Charles is piling on for fun.

Charles posted a video on Twitter that mocked the Dobre Brothers’ interaction with their fan, mimicking their lethargic response with his own feigned indifference toward a supporter.

The Dobre Brothers were ridiculed for their bored looks and indifferent responses toward a fan, filled with smiles, as she approached them at a VIP meet and greet in early October. According to Pop Buzz, those VIP tickets sold for as much as $599, but that kind of cash didn’t illicit much of a reaction from the brothers who have 7.8 million YouTube subscribers on one channel and 17.6 million on another.

In the video, the excited fan walks to the Dobre Brothers, and their body language suggests they’d rather be anywhere else in the world.

PLS TELL ME THIS IS A JOKE pic.twitter.com/uFg7ChXJpF

After facing online criticism, the YouTubers apologized and said, “After a long 48 hours of restless filming and touring then meeting thousands of fans with no sleep we were exhausted by the end of our show. Our true apologies. We are sincerely sorry.”

Other YouTubers have taken the Dobre Brothers to task, racking up hundreds of thousands of YouTube views on their own with their reaction videos. But Charles—who has faced plenty of controversies of his own, including his feud with fellow beauty vlogger Tati Westbrook and for bringing Birmingham, England to a complete standstill—went a little further with his own video.

In his post, a fan approaches Charles and others during a meet-and-greet, and the confused-looking woman is stymied when everybody remains as still as a mannequin. After she takes a photo and walks off screen, Charles and his friends break into fits of laughter and welcome the woman back with hugs. In his tweet, Charles wrote, “We just wanted to apologize. After a long 48 hours of restless filming and touring then meeting thousands of fans with no sleep we were exhausted by the end of our show. Our true apologies. We are sincerely sorry.”

We just wanted to apologize. After a long 48 hours of restless filming and touring then meeting thousands of fans with no sleep we were exhausted by the end of our show. Our true apologies ❤️ we are sincerely sorry. pic.twitter.com/RXVzoszlHb

Charles’ video has been watched more 3.3 million times as of this writing. Lucas Dobre saw it as well and wrote on Twitter, “We all make mistakes but it’s up to us to own up to our mistakes and make things right when God gives us a second chance. We love you Kylee. And James… I’m sure you know what it’s like feeling like the whole world is against you.”