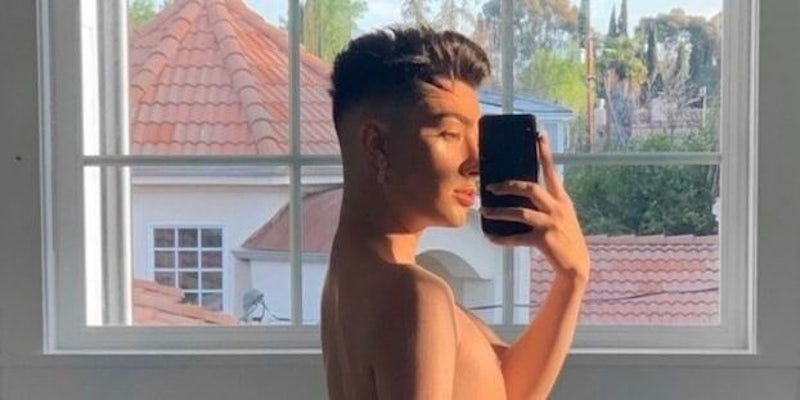 After a hacker apparently broke into the social media accounts of YouTube star James Charles, the beauty vlogger fought back in the best way he knew how. He posted his own nude photo.

Now, Charles (or, more accurately, Charles’ backside) has been turned into a meme—and he seems totally fine with it.

The last time Charles made this much news, he was feuding with his mentor Tati Westbrook and losing more than 2.5 million subscribers in the process. But recently his Twitter account was hijacked with messages like, “My cock is throbbing Lmao,” “I like to fuck cats w Shane Dawson,” and “Going to Japan with Logan Paul and find some dead [N-word].”

On Saturday, after the 20-year-old recovered his Twitter account from the apparent hacking, Charles posted a naked photo of himself from the back to his more than 4 million followers.

He wrote, “hi I got my account back just case I ever get hacked again, here’s the ONLY nude I’ve ever taken! Can’t threaten me with it now get a life.”

That tweet, as of this writing, has racked up more than 22,000 retweets and more than 223,000 likes. And people were happy to jump on his backside bandwagon, including Adam 22 of the No Jumper podcast and Ethan Klein.

Not everybody was pleased to see Charles naked, though. One Twitter user mentioned how many child fans he has and said, “You’re sick as fuck.” Another derisively wrote, “Literally, no one asked for this.” Charles responded in kind by writing, “yeah well i didn’t ask to have my security and privacy threatened either [@]slutdelrey so this is me taking back ownership of the situation, move on with your day.”

not a single soul:

Still, others used Charles’ naked body to serve as their own artist’s canvas or to send what they thought were important messages.

so @jamescharles leaked his own nude and lowkey he’s got a point with this one pic.twitter.com/s2JTrcoT6Z

Either way, Charles made quite a stir on Twitter during the weekend—and he was feeling bubbly about it. Wrote Charles, “I love accidentally creating a meme, sorry twitter.”