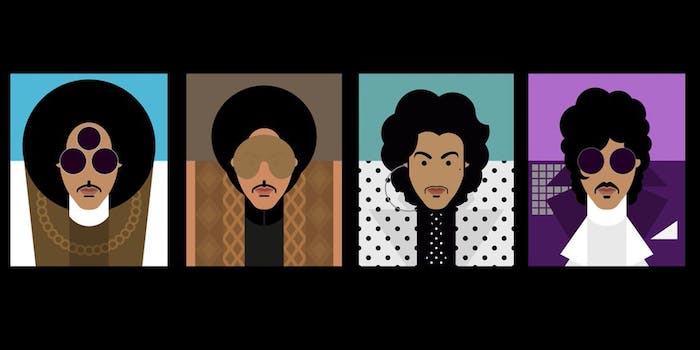 Is Tidal worth it?

If you downloaded Tidal to get your fix of Prince or Beyoncé, it's time to reevaluate your options.

I’ve been tempted to download Tidal ever since Kanye West dropped The Life of Pablo exclusively—at least for a moment—on the streaming platform. But as with Rihanna’s Anti before it, I knew it was only a matter of time before alternate avenues emerged.

Prince’s tragic death on April 21 changed things entirely. The R&B icon had a fraught relationship with the Internet to say the least, leaving those scrambling to find an adequate soundtrack that day with few options outside random YouTube clips or purchasing his catalog on iTunes. My CDs are still in boxes from my last move, and there’s a noticeable gap in my record collection in the “P” section, so I turned to Tidal—the only streaming service that offers Prince’s deep discography on demand.

If that hadn’t forced my hand, the surprise release of Beyoncé’s masterpiece, Lemonade, two days later, surely would’ve. The combination of those two events brought a reported 1.2 million new subscribers to Tidal.

That means everyone’s 30-day free trial is almost up. Here’s what I’ve learned about Tidal’s biggest selling points over the last month and why I’ll be disconnecting.

Note to self: Cancel Tidal subscription on May 24.

There’s only one Prince

Need to hear Purple Rain right now? Have a sudden urge for the soundtrack for Tim Burton’s Batman? Curious how Prince’s flurry of new releases actually stack up? Tidal is the only place you can hear it all on demand. It’s a ridiculously deep catalog and can you occupy you for months, if not years. 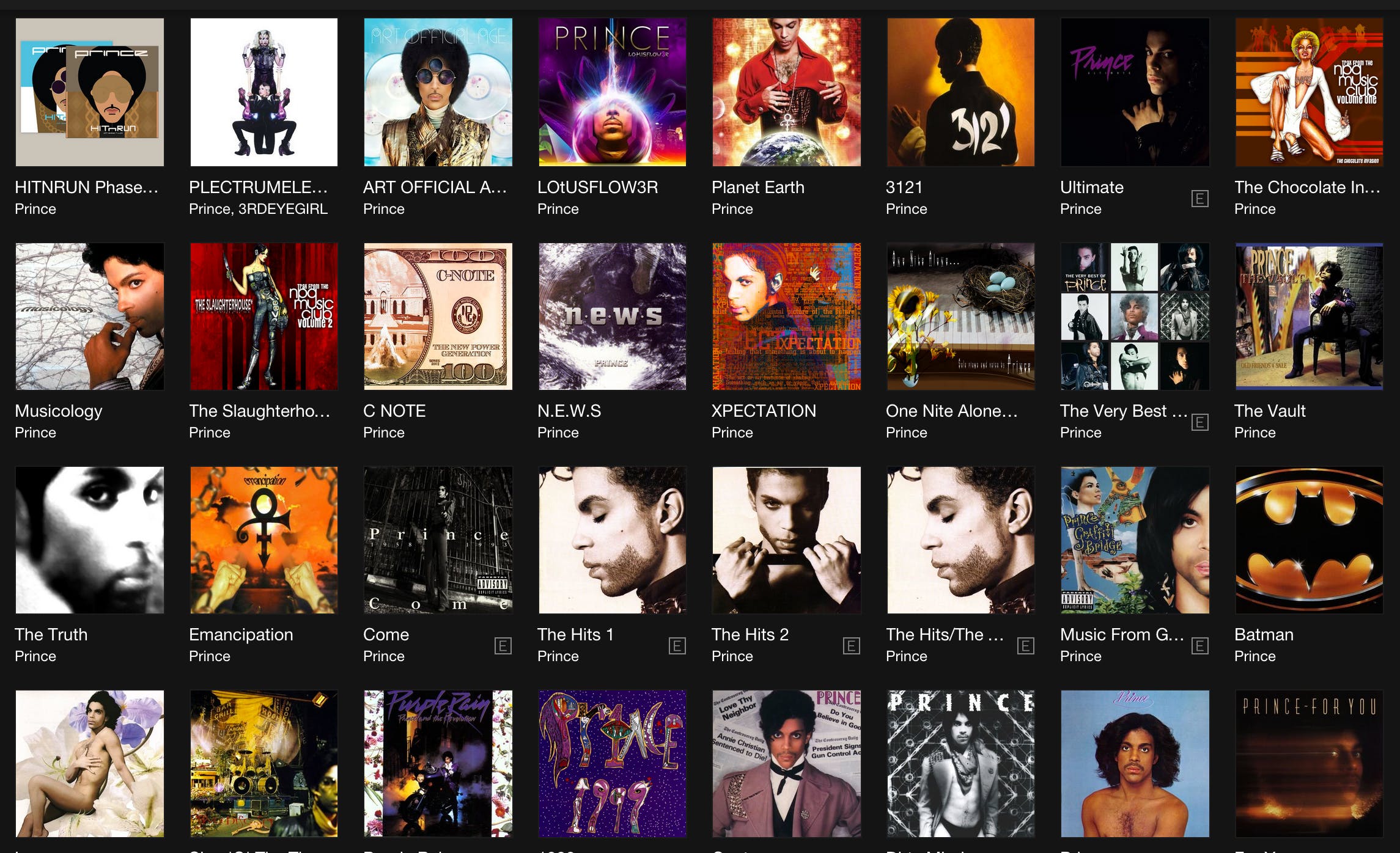 Principal owner Jay Z has a deep Rolodex of connections, and Tidal’s “artist-owned” model makes it a premium destination for high-profile exclusives. Rihanna initially released her latest thriller, Anti, in February as a Tidal exclusive, followed in short order by Beyoncé’s “Formation,” West’s The Life of Pablo, and ultimately, Lemonade, though the latter can still be viewed via HBO Go. As of this writing, Radiohead’s A Moon Shaped Pool can be streamed in its entirety on Tidal and Apple Music—but not Spotify. It’s also become a destination for new music videos (Nicki Minaj’s“Feeling Myself” and Rihanna’s “Bitch Better Have My Money”), and the occasional streaming concert. While it seems to only be a matter of time before the window of exclusivity closes on these sorts of releases, it’s clear that if you want to hear them first, you need to be on Tidal.

Tidal’s defining feature is its high-fidelity sound. Whereas most streaming services—and Tidal’s $9.99 tier for that matter—offer only mp3s, which squash audio files in the interest of saving space on your hard drive, its premium version ($17.99 per month) relies on FLAC (free lossless audio codec). That means that you’re getting a far higher quality of sound—what the artist intended you hear—every time you start streaming.

This is by far the most appealing aspect of Tidal for me personally, especially when I’m streaming through Sonos. But for most people, it’s a complete non-factor. A decade of iPods and shitty earbuds have taught most to accept audio quality that’s closer to a ringtone than an LP.

One of the most daunting aspects of leaving Spotify is losing all of the playlists I’ve painfully curated over the years. Thankfully, Tidal integrates with soundiiz.com, which makes it easy to import playlists from Spotify and Soundcloud. I tested out a couple of my own playlists and was mostly satisfied with the results. I lost significant chunks in the Numero Group catalog, and a handful of tracks from my Best of 2015 playlist (Django Django, Lera Lynn, Hop Along, Battles, Thunderbitch). The more obscure you get, the more you’ll lose: Eight of the tracks from my Losing My Edge playlist, which pulled one track from each artist referenced in LCD Soundsystem’s track of the same name. But honestly, that was less than I expected, and the whole process took under 10 minutes. 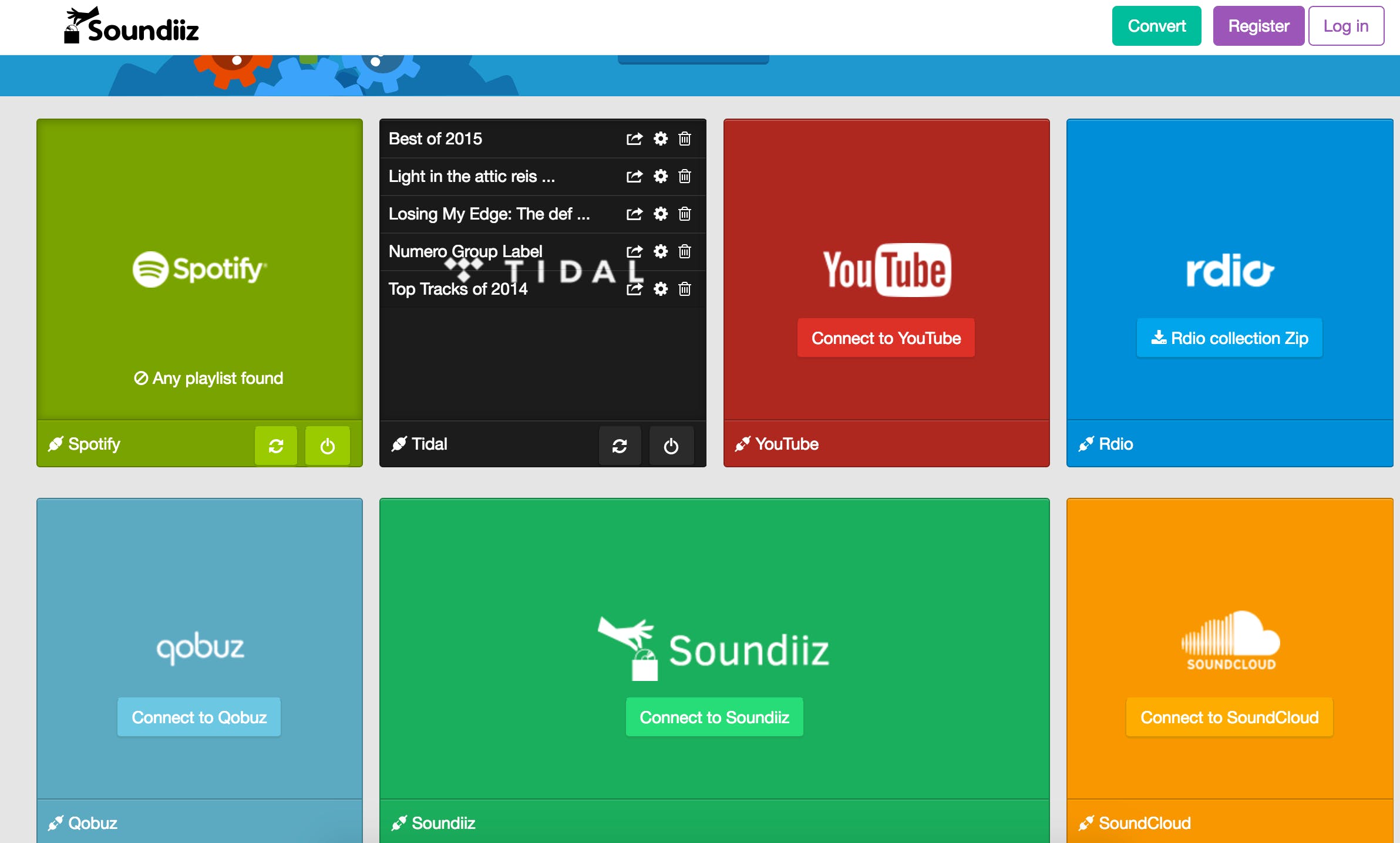 This isn’t a distinctive feature for Tidal—Spotify offers it—but it works really well. If you need to download an album for the gym or the subway, it’s as easy as toggling from within the app. What Tidal lacks in original content (like Spotify Sessions), it’s attempting to make up for with thoughtful playlists, curated either by its editorial staff or by the artists themselves. There’s a lot to unpack here. It reminds me of the supplemental CD you’ll get with Mojo magazine, allowing you to dig a little deeper into the material. Take, for instance, this collection of tracks helmed by Radiohead producer Nigel Godrich, this playlist of the samples from Drake’s Views, or these unexpected Nirvana covers, pegged to Sturgill Simpson’s “In Bloom” overhaul.

So is Tidal worth it?

Whether you’re willing to pay for Tidal or not will depend almost entirely on if you already have a preferred streaming music service and how much stock you put into its high-fidelity sound.

Unlike Spotify, Tidal doesn’t offer a free, ad-supported version—though it’s worth noting that it extends discounted rates for veterans and is 50 percent off for students. Given the overlap in their offers, and the infrequency of genuinely exclusive releases, that means you’re ultimately going to be paying a little more for what’s essentially the same service.

What Tidal is really lacking is a defining feature, something that clearly differentiates it from Apple Music and company. HD video isn’t it. For Spotify, it’s the platform’s Discover feature—which offers personal recommendations and a shockingly good weekly playlist based on complex algorithms and your own personal listening habits—and the ability to see what your friends are listening to and share playlists with relative ease. (Tidal has its own version of Discovery, but it’s nowhere near as sophisticated as what Spotify provides.) 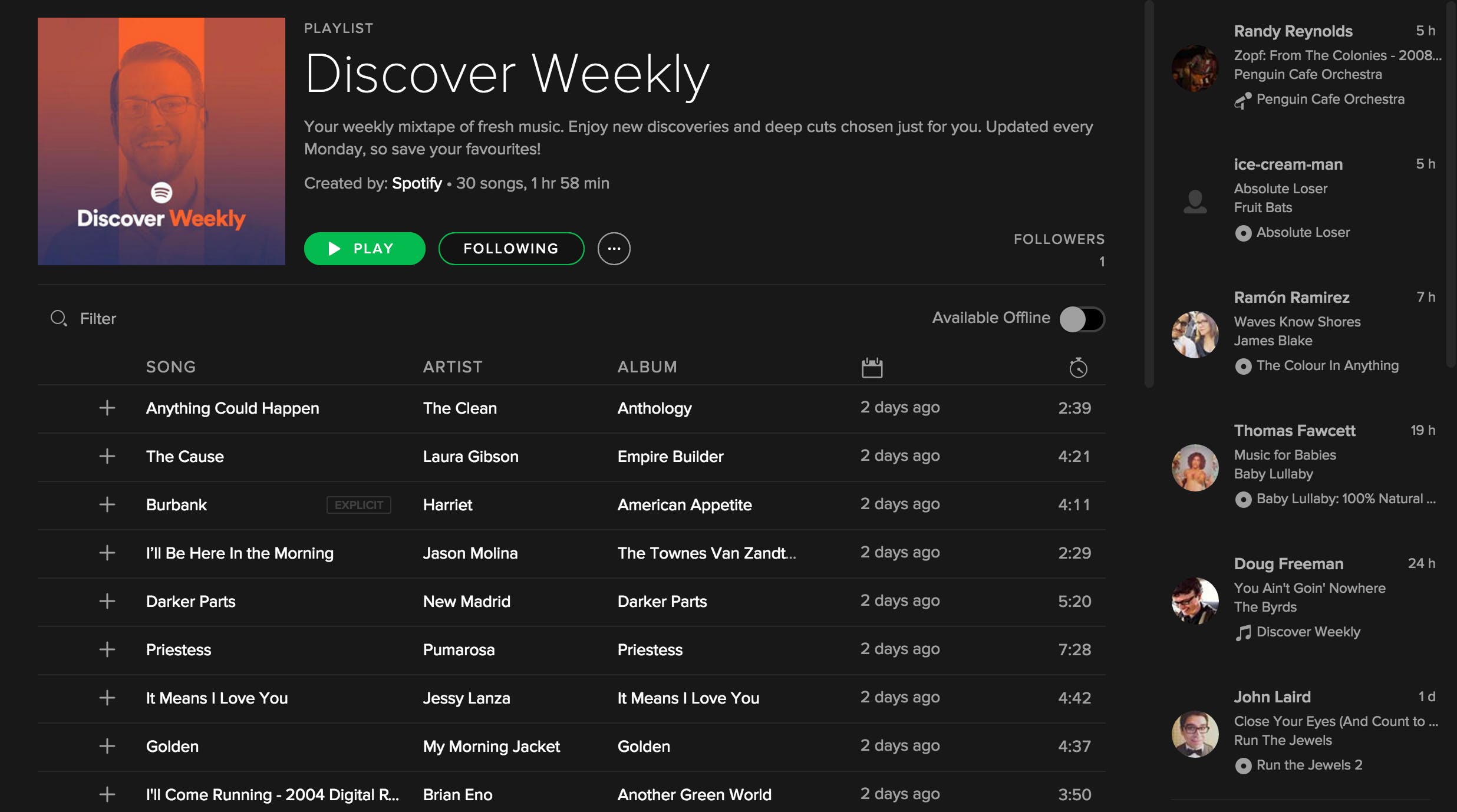 [E]xclusives aren’t enough: What Tidal has yet to offer is a compelling narrative—or any real reason that users should prefer their service over Apple Music, Spotify, Pandora, Rhapsody, Yahoo Music, or any of the other virtually identical offerings from other companies. It’s not just about content but doing something different than what every single other streaming service provides.

Canceling your Tidal subscription is easy. Just go to Settings > Account > Manage Subscription. In the pop-up window, click on Subscription again, then look for “Cancel my subscription” in the bottom right-hand corner. 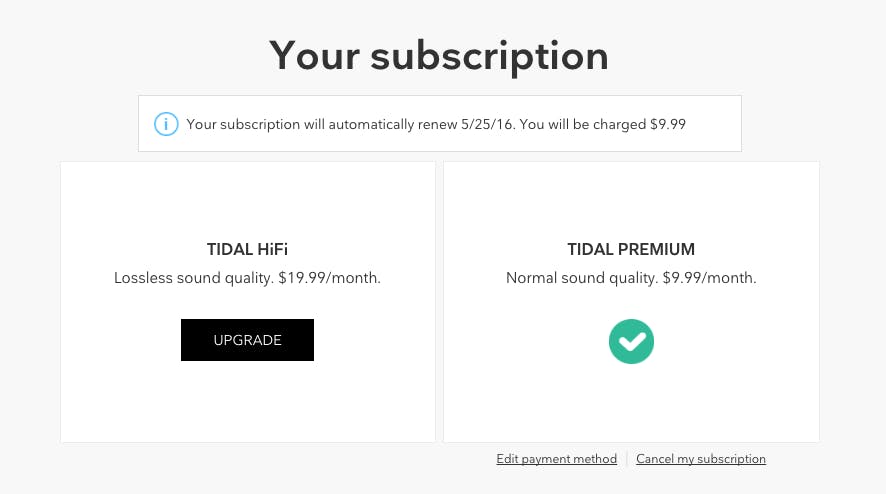 As for me, let’s just say I finally stocked up on Prince records.