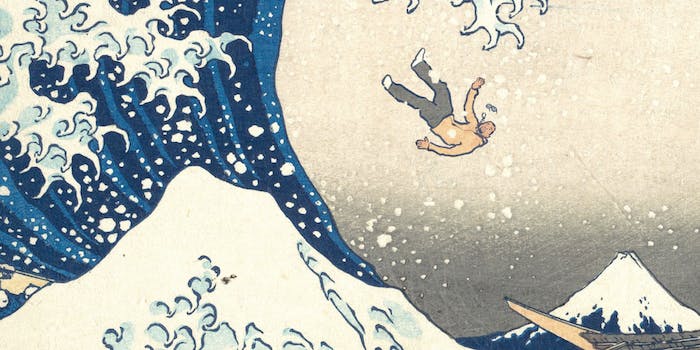 Can Kanye West save Tidal?

In the words of Public Enemy: Don’t believe the hype.

Can Kanye West save Tidal? The rapper, who says he is $53 million in debt and is publicly asking for $1 billion from Facebook CEO Mark Zuckerberg to support his “ideas,” just dropped his long-delayed and frequently re-titled album The Life of Pablo (T.L.O.P.) on the streaming service. In true Kanye West fashion, he referred to it as “the album of the life” on Twitter.

That may be his trademark braggadocio, but his record has been a major boon to Tidal. After being bought by the rap mogul Jay Z last year, the music subscription app finally reached the top of the iTunes charts—currently the number-one free app in the world. (It’s $9.99 a month for Tidal’s premium service and $19.99 for the hi-fi version.) Shawn Carter (a.k.a. Jay Z) doesn’t just have Kanye to thank for reaching that summit. It’s been a big month for Tidal: Rihanna dropped ANTI on the service, and his wife Beyoncé’s new single, “Formation,” remains a Tidal exclusive.

But in the words of Public Enemy: Don’t believe the hype.

As Gizmodo’s Alex Cranz found, downloads in Tidal only surge when the service drops its most recent (temporary) exclusive. When that content debuts on another streaming service or hits the iTunes store subscribers flock elsewhere to consume it. So if Google Trends show interest in the service peaking at a trending score of 50 (out of 100) after ANTI became available to Tidal listeners, Tidal was back down to 12 within the week. After the album became available on Spotify, who needs Tidal?

In the era of the streaming wars, the conventional wisdom is that content is king, and Tidal’s entire sales pitch is that they offer songs, videos, and experiences unique to its brand.

But unfortunately, exclusives aren’t enough: What Tidal has yet to offer is a compelling narrative—or any real reason that users should prefer their service over Apple Music, Spotify, Pandora, Rhapsody, Yahoo Music, or any of the other virtually identical offerings from other companies. It’s not just about content but doing something different than what every single other streaming service provides.

The problem with Tidal began with its sales pitch. To debut the app, Jay Z brought together a group of multimillionaires like Madonna, Jack White, and Alicia Keys for a “keynote” last March to preach musical revolution; Keys even quoted Friedrich Nietzsche. Later, Jay Z would complain to the New York Times about the injustices of being rich and famous. “The challenge is to get everyone to respect music again, to recognize its value,” Jay Z said. “Water is free. Music is $6 but no one wants to pay for music.”

According to New York magazine’s Annie Lowrey, the much-derided press launch made the service “[sound] like nothing more than the world’s worst charity appeal.” Lowrey wrote, “Your $20 a month could help a megastar like Madonna renovate the kitchen in her fifth home. It could help send a global phenomenon like Beyoncé to the Riviera for the summer. Won’t you give now?”

What Tidal has yet to offer is a compelling narrative—or any real reason that users should prefer their service over Apple Music, Spotify, Pandora, Rhapsody, Yahoo Music, or any of the other virtually identical offerings from other companies.

Critics referred to the message as “elitist” and “out of touch,” and the brand has evolved little since then. In fact, Tidal has only doubled down on the idea that the name-brand artists attached to the company will be appeal enough to convince listeners to pay more to sign up. Tidal has boasted an enviable roster of premieres in the past year—streaming Tidal-only concerts from Jay Z and Prince, while dropping music videos from Nicki Minaj (“Feeling Myself”) and Rihanna (“Bitch Better Have My Money”).

But a handful of music videos does not a compelling business model make. What attracts subscribers isn’t just content that gets them in the door but a reason to stay. If you can temporarily download Tidal for free to stream the new Kanye album, it’s just as easy to delete it instantly afterward. Space is at a premium on most iPhones, and that means users are unlikely to keep an app installed they simply won’t use, especially if they already have Spotify.

This has shown in Tidal’s numbers. By last April, Tidal had fallen out of the top 20 downloaded apps—not even ranking in the top 700. While Apple Music has amassed an estimated 11 million subscribers since launching last June, Tidal has just 1 million—and even those numbers may be inflated. According to VentureBeat, the service “already had 700,000 subscribers when he acquired it in March 2015 from a Swedish company.” It has a long way to go if it wants to take down Pandora and Spotify—which together boast an amazing 175 million free and premium users.

If Tidal hopes to take on Spotify, it should look to brands like Hulu, Amazon Video, and Netflix for an example of how to stay competitive in a crowded market. These video sites have each carved out a niche for themselves not only by offering exclusive content (Netflix airs House of Cards and Master of None while Amazon is home to Transparent), but offering specific features that make each stand out.

In addition to an enviable slate of original programming, Netflix offers its traditional DVD option, for those looking for fare outside its more limited streaming options. While just 5 million users still pay for the DVD service at a time when streaming has conquered the marketplace, that’s not much less than Hulu’s total number of paid subscribers (9 million). If Hulu’s appeal is based on current seasons of TV shows, what makes Amazon Video great is that it allows you to download movies and TV shows for a 48-hour viewing window; that means that, for the train riders among us, you can even watch Ex Machina offline during your commute.

What attracts subscribers isn’t just content that gets them in the door but a reason to stay.

The reason these brands coexist is because they seem to complement each other, whereas Tidal feels like a glitchy, redundant service that’s still looking for its purpose. Pandora’s popularity is fueled by the fact that it behaves like a radio station that’s geared toward your specific musical interests, whereas browsing Spotify is like going to an endless library filled with all your favorite records. It even has a massive assortment of user-created playlists, for those who want a great workout music or hope to test their musical boundaries.

Instead of giving users a glitchy, ego-driven version of a product they already have, Jay Z will need to figure out what the market lacks. It’s not about what Nicki Minaj and Jack White want—to be paid more money—but what their customers need. It appears that the artists behind Tidal were so busy boasting about how their new business was going to change everything that, in the process, they forgot to change anything.

Braggadocio is fine, but true innovation is what Tidal needs.