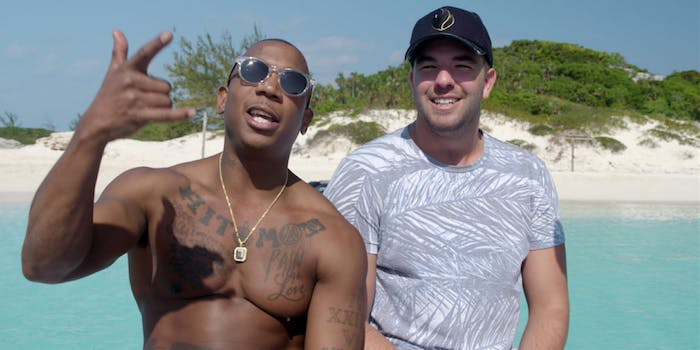 Ja Rule thinks he was also a victim of Fyre Fest

The rapper watched the Netflix and Hulu docs and claims he was scammed too.

This weekend, many people consumed Netflix’s Fyre documentary and Hulu’s Fyre Fraud, two different takes on the disastrous Fyre Festival. Ja Rule, who was billed early on as the festival’s public face, doesn’t appear in either (at least not in the present day—there’s definitely some unflattering footage of him in Fyre), but he took to Twitter on Sunday to clear his name, claiming that he “too was hustled, scammed, bamboozled, hood winked, lead [sic] astray!!!”

He also stated that he “will tell my truth real soon… AND I HAVE RECEIPTS!!!”

I too was hustled, scammed, bamboozled, hood winked, lead astray!!!

Haha nice try homie you ain’t getting the goods over Twitter… but I will tell my truth real soon… AND I HAVE RECEIPTS!!! https://t.co/O03JD3VQOl

So it’s impossible for me to TRUST someone with my vision and them completely fuck it up??? And it wasn’t my money so when I asked questions I was lied to… https://t.co/clsRhbCMQS

While Ja Rule is right that the Bahamian locals should have gotten money instead of co-founder Billy McFarland (he was paid for an interview for the Hulu doc, but it’s not clear how much), this posturing does seem odd, especially considering Fyre provides audio of the post-festival meeting in which Ja Rule tries to claim it wasn’t fraud but “false advertising,” and Fyre Fraud includes an interview with a Bahamian local, Delroy, who claims Ja Rule asked if this festival was even realistic (he said no).

But this also sounds familiar. During the chaos of Fyre Fest in April 2017, Ja Rule tweeted about working to get stranded festival-goers off the island but also made sure to state it was “NOT A SCAM” and “NOT MY FAULT.”

History proved it definitely was a scam, but last fall Ja Rule again denied responsibility in regards to a $100 million lawsuit, claiming his social media posts promoting the festival in its lead-up didn’t influence anyone to go to the festival, and that he was never on the island during the event.