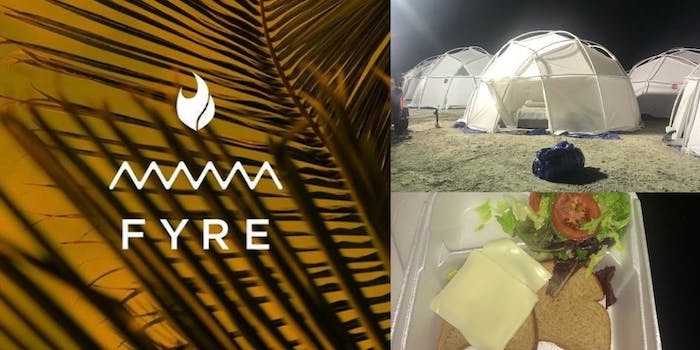 Ja Rule’s Fyre Festival is now a circle of hell

The festival is currently coordinating flights off the island for attendees.

Ever wanted to watch rich people have the worst time of their lives after spending thousands upon thousands of dollars? Look no further than the first weekend of Fyre Festival, a three-day long luxury music fest ran by Ja Rule that has been “permanently postponed” after its first wave of attendees arrived to unfinished accommodations, cheese sandwiches, and a cancellation from headliner Blink-182.

Fyre Festival was a creation of the rapper and entrepreneur Billy McFarland, and was billed as a “luxury” event with Instagram promos from models and influencers Bella Hadid and Emily Ratajkowski.

For the reasonable price of $4,000 to $250,000 for a 12-person VIP package, attendees could visit a private beach and enjoy their luxury rooms and fine dining while listening to Migos, Tyga, Pusha-T, Disclosure, Blink-182, and more.

But when attendees arrived on April 27, one day before the initial start of the festival, Fyre Fest was far from stoked. The luxury accommodations appeared to be disaster relief tents from FEMA, and were reportedly poorly-built and unfinished. The island of Exumas wasn’t private, but was shared with locals, as well as a Sandals resort.

Early report is that many of the tents aren't assembled. Here's their tropical private island owned by Escobar! #FyreFestival pic.twitter.com/TNzBDbNAUJ

From someone on the ground at #FyreFestival pic.twitter.com/20ZuzhKNzI

The promised catering from STARR Events had been replaced with cheese sandwiches and dressing-less salad in Styrofoam to-go boxes. Attendees were reporting lost luggage and even stolen property—some attendees and one rogue Twitter account alleged the U.S. Embassy was getting involved, and that lawsuits against the festival are anticipated. By Thursday night, Blink-182 had cancelled—though the Wall Street Journal had reported that the festival had yet to fully pay some artists by late March.

This is how Fyre Fest handles luggage. Just drop it out of a shipping container. At night. With no lights. #fyrefestival pic.twitter.com/X5CdZRyJWo

One of the kitchens at Fyre Festival. #fyre #fyrefest #fyrefestival pic.twitter.com/gQIpwxrw6S

A view of the luxury food court with some luxury school bus transportation at Fyre Festival. #fyre #fyrefestival pic.twitter.com/XL3PtRw8q0

Festival attendees also somehow, though almost unsurprisingly, found a planner from one of the Fyre organizers, just proving how horrendously unplanned this whole fiasco of a festival had been.

Also, we found a notebook from one of the Fyre Fest planners on the ground. It is amazing. #fyrefestival #fyre pic.twitter.com/jFib0nO2RW

Even people who weren’t at the festival were having a ball making fun of rich people who had been seemingly bamboozled by Ja. Jokes populated a Fyre Festival subreddit and Twitter, one even comparing Fyre Festival to the ball pit meme from Dashcon, the epically-failed Tumblr convention from 2014.

y'all im laughing so hard people really spent $12k on the #fyrefestival to be in the 76th hunger games pic.twitter.com/YhvYlZOL7p

As compensation for any ill will caused by #fyrefestival
Official Staff has announced all attendees will get an extra hour in the ballpit. pic.twitter.com/Us58auYPSB

After getting dragged on Twitter and Instagram by attendees who posted about the situation, Fyre Festival canceled all other inbound flights from Miami for the festival, citing “overcapacity” and safety concerns. Meanwhile, it appears that attendees who chose to leave the festival are having difficulties leaving Exumas. They supposedly boarded and deplaned several times, and had doors literally shackled to shut them in at an airport terminal. But now it appears that attendees might finally be on their way out.

They've now locked us in the airport. No rules, just right. Welcome to the Bahamas! (Tell my family I love them) #fyrefestival pic.twitter.com/KkgkroZzhc

Getting back on the plane to go to Miami. Maybe. Who knows. I have major trust issues at this point. #fyrefestival pic.twitter.com/m549gSb1H9

Later this morning, Fyre Festival tweeted that the event was “fully postponed” because of “unforeseen and extenuating circumstances,” though Mixmag reported that sources close to the festival say that organizers knew essential festival production wasn’t close to being completed as soon as four weeks out from the first weekend.

While the Fyre Festival website states that tickets are nonrefundable, they’ve said that attendees whose flights to Exumas were canceled will be refunded tickets.

Due to unforeseen and extenuating circumstances, Fyre Festival has been fully postponed (con't)

After assessing the situation this morning and looking at best options for our guests, we cannot move forward as we hoped we could (con't)

At this time, we are working tirelessly to get flights scheduled and get all travelers home safely

The Fyre Fest website has also been removed in place of a statement from the festival team.

“Due to circumstances out of our control, the physical infrastructure was not in place on time and we are unable to fulfill on that vision safely and enjoyably for our guests,” the statement reads. “We ask for everyone’s patience and cooperation during this difficult time as we work as quickly and safely as we can to remedy this unforeseeable situation.”

Update 2:00pm CT, April 28: Ja Rule, a co-founder of the festival, posted a short statement to his Twitter account shortly before 1:30pm CT. In the statement, the artist said the Fyre Festival team is working on getting all attendees off the island, and took responsibility for the festival’s failures, though he wrote he wasn’t sure how “everything went so left.”

“I will make a statement soon I’m heartbroken at this moment my partners and I wanted this to be an amazing event it was NOT A SCAM as everyone is reporting,” Ja Rule wrote. “I’m working to make it right by making sure everyone is refunded.”