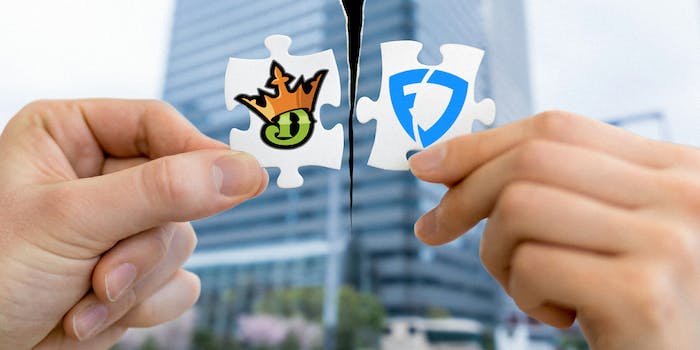 FTC will attempt to block FanDuel, DraftKings merger in another blow for fantasy football

DraftKings, FanDuel make up about 90 percent of the DFS market.

The Federal Trade Commission will attempt to block the merger between daily fantasy sports sites FanDuel and DraftKings, the FTC said Monday.

FanDuel and DraftKings, by far the two biggest DFS sites, announced in November that they would combine forces in order to “create a stronger entity that can focus on growing the fantasy sports market by developing new products and features, delivering enhanced user experiences, and creating an overall stronger fantasy sports community.”

But the FTC said Monday that the two sites together would control more than 90 percent of the market if a merger was allowed, and as a result, the commission along with the attorney general offices in California and Washington, D.C., will file a complaint in federal court that seeks a preliminary injunction to stop the deal.

“This merger would deprive customers of the substantial benefits of direct competition between DraftKings and FanDuel,” Tad Lipsky, the acting director of the FTC’s Bureau of Competition, said in a statement. “The FTC is committed to the preservation of competitive markets, which offer consumers the best opportunity to obtain innovative products and services at the most favorable prices and terms consistent with the provision of competitive returns to efficient producers.”

In a joint statement released Monday, DraftKings and FanDuel said they are now considering their options.

“We are disappointed by this decision and continue to believe that a merger is in the best interests of our players, our companies, our employees and the fantasy sports industry,” they said. “As we work together to determine our next steps, we would like to thank DraftKings and FanDuel players, partners and employees for their patience, support and continued loyalty.”

The DFS industry certainly has had a difficult time with federal and state governments, as about a dozen states have declared it a form of gambling and have banned it (though the sites also won an important approval from New York). Both sites were also under federal investigation after a DraftKings content manager won $350,000 while playing on FanDuel in the same week that insider data was leaked online in 2015.

But people continue to play, and in March, it was announced that DraftKings had raised another $100 million, adding to the hundreds of millions of dollars secured by both sites since the beginning of the 2015 season.