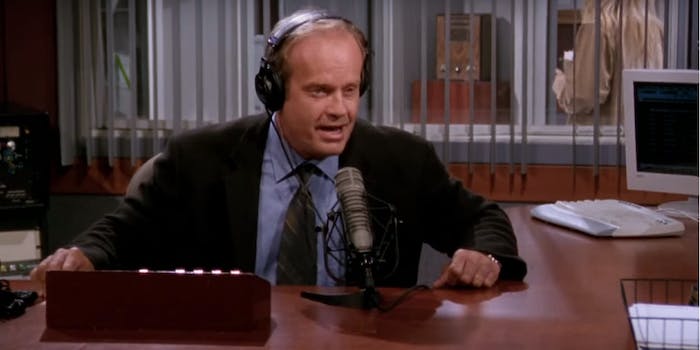 'This big ham is my favorite son.'

Frasier is one of those TV shows that weathered the internet age and drew a devoted fandom. It was a show about the highbrow and intellectual, but also about family. Who could forget the episode where Martin says, “This big ham is my favorite son”?

Botnik Studios, which previously trained a neural network to create a Coachella lineup, has now moved on to Frasier scripts. Whereas the Coachella lineup was a chuckle-worthy string of band names, the Frasier script is actually pretty cogent. Can’t you picture Niles telling Frasier to pour chili on him?

We did predictive text again, and this time…

Botnik writer Nat Towsen said on Twitter that they were trying to stay true to the show’s “voice,” and broke down exactly how they got these results. This wasn’t machine learning; there was a human element.

Hi Emily! I took the lead on this one and can confirm that you're totally right. We took special care to mimic the show's well established voice and try to do it (absurd) justice.

We separated a bunch of Frasier scripts into dialogue for each character, then trained predictive text keyboards on each section. We used those to write this.

A bunch of us wrote chunks of dialogue and narration, then I arranged then into some semblance of a narrative. Then I worked with a small team of writers to fill in the gaps (ie I'd say "I need Frasier saying something pompous").

You can try writing your own scripts using the predictive text keyboards.