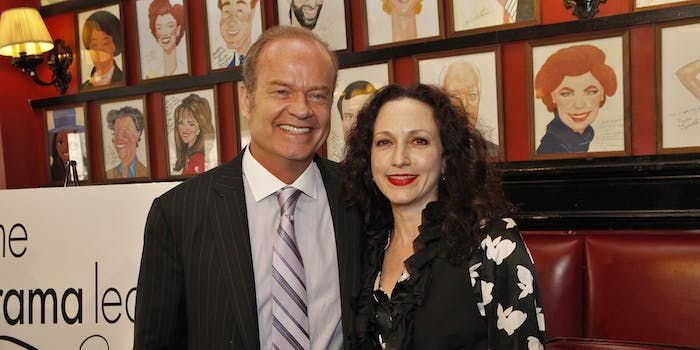 Frasier always felt old. Even when it was on, it was stuffy, affected, and out of touch.

The Internet loves nostalgia. As time marches forward, pop culture staples of yesterday often achieve a kind of mythical status online. Anniversaries, fandom, and general appreciation are all magnified from behind our computer screens. That’s why it’s surprising when the nostalgia train leaves a once-beloved relic behind.

This week, Daniel D’Addario at Salon penned an article titled “The tenth anniversary of “Frasier” proves the limits of Internet nostalgia.” In it, D’Addario seeks to understand why the Internet missed this pop culture milestone, when the 10th anniversaries of TV shows like Friends and movies like Mean Girls have been all over the Web recently.

D’Addario posits that Frasier wasn’t unique enough to stick in most people’s minds, writing, “’Frasier’ never had the oddity of a ‘Friends’ or a ‘Seinfeld,’ where characters could be entertaining with their spiky, unique chemistry. The ways the characters interact — father-son, brothers, boss-employee—are well-done, but familiar to the point that one doesn’t need to be nostalgic for them.”

D’Addario is correct in suggesting that Frasier is pretty far off from the likes of Friends and Seinfeld. Sure, occasionally you’ll see someone throw it a little love, but the Internet hasn’t gushed over it the way it has with Friends. This is because Friends’ DNA continues to be identifiable to many of the younger denizens of the Internet. It’s a show about hip, young, white people living in a big city, and as D’Addario points out, it, “held an obvious appeal to young kids watching TV, the same young kids who, ten years later, are exactly the right age to be junior entertainment writers for websites or junior employees at desk jobs surfing the web all day.”

And Friends’ legacy is still seen all over TV today. It can be felt in everything from How I Met Your Mother to New Girl (although New Girl has actually included several non-white members in its ensemble.)

Seinfeld, on the other hand, manages to continue being relatable to multiple generations in that it’s “a show about nothing.” The observational minutia of the Seinfeld universe still rings true for anyone who can find humor in the monotony of daily routines and interactions. There are a few minor plot points that might not work today because of advances in technology, but the ideas still ring true. That’s why the show updated so well in the version we saw on Curb Your Enthusiasm.

But the other thing that set Frasier apart from its NBC counterparts was that it was never cool. It probably got a huge ratings boost simply by being a part of “Must See TV,” but it was known for being an awards darling as much as than anything else.

If you look at Frasier next to something like Will & Grace, they both seem old: the laugh track, the pratfalls, the over-the-top sitcom premises. But Will & Grace, like Seinfeld and Friends, was also somewhat ahead of its time, which is why today, those shows are more likely to appeal to younger viewers, the millennials who might have grown up with those shows on in the background and drive Internet nostalgia. Frasier always felt old. Even when it was on, it was stuffy, affected, and out of touch.

Of course, that was the point. That was what made it funny.

What D’Addario doesn’t get right in his analysis of Frasier is that compared to the more traditional sitcoms on TV today, Frasier is extremely unique. Yes, it feels old-fashioned, but its best episodes stand out for being boldly pretentious and unapologetically highbrow. In one of the Internet’s only other big reflections on the show’s 10-year anniversary, Jillian Maples of Flavorwire wrote:

The entire premise of the show was surprisingly off for network TV: two ballet-attending, Italian loafer-wearing, espresso-sipping psychiatrist brothers, the Cranes, get into trouble in and out of their own bubble of elitism from time to time. And they’re straight! When Frasier premiered on NBC in 1993 as a Cheers spin-off, the term “metrosexual” was still a year away from being coined, and it would be nearly a decade until its use would become ubiquitous among suburbanites. With Frasier, the mainstream was OK with Puccini references and caviar puns that went over their heads at time because the farce was funny enough. In this sense, I’ve always thought of Frasier as the Steely Dan of network sitcoms.

The Steely Dan analogy is an apt one. Although recognized by critics as original and important, they’re not a band you hear younger people talking about very often.

The closest thing to Frasier on TV today is probably Modern Family (co-created by Christopher Lloyd and Steve Levitan, both of whom formerly worked on Frasier), simply because both shows focus on how we do or don’t relate to the people we’re related to. However, besides being far apart in a stylistic sense, while the characters inside the mini-mansions of Modern Family are all clearly upper class, the show is designed to depict universal truths about all families, even the richest and most “modern” ones.

Frasier, too, depicted many universal truths about families, but it never strove to find common ground between its characters and its audience. Frasier and Niles Crane were always odd ducks, and their wealth usually made them seem snooty, rather than cute.

The other show on TV right now which one could also compare to Frasier is The Big Bang Theory. Both shows straddle the line between workplace and domestic comedy, both shows are about uber-intelligent individuals struggling to relate to the world around them, and both shows employ the traditional multi-camera sitcom format.

The difference is that The Big Bang Theory uses ideas about intellectualism to capitalize on the rise of “nerd” culture in the zeitgeist. It takes every possible stereotype of nerdiness and creates a giant buffet for the viewer; on one side, a few comic-book references you might get, on the other, some jokes about protons you probably won’t.

Frasier, on the other hand, consistently made efforts to distance itself from the easily recognizable. By crafting narratives around opera and fine wine, it relied on stereotypes the average American continues to associate with only the most stuck-up individuals. Moreover, while The Big Bang Theory works for multiple reasons, it also functions as another story about young urbanites trying to find love, making it a distant relation in the Friends family.

The Internet’s obsession with nostalgia primarily stems from the past’s influence on the present. It’s not surprising that something like Mean Girls feels as current as ever 10 years after its release—because the movie’s ideas and sense of humor still resonate in mainstream culture today. For a show that ran 11 seasons, Frasier never had any interest in being part of the mainstream. It created a brand of comedy that was built on exclusivity and stodginess, and in doing so, it became one of the most distinctive shows of its era.

But even in that era, it didn’t really fit in. Which is why today, Frasier stands out in its ability to be nostalgia-proof. Just like when it was first on the air, there are no other shows like it. Occasionally, you’ll catch a whiff of its influence in network TV. But there are only the faintest traces of it left behind. That’s why we don’t celebrate “Frasier Crane Day” every year, while Oct. 3, on the other hand, has become widely recognized as Mean Girls Day.

Photo via The Drama League/Flickr (CC BY 2.0)