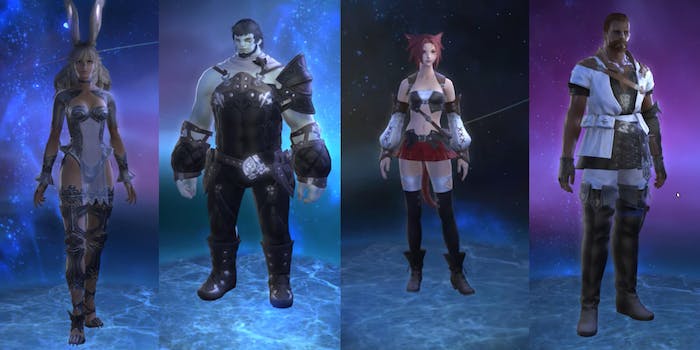 Which race should you choose in Final Fantasy XIV?

The Final Fantasy series has spanned more than 30 years and 15 titles. Through the years, these games have introduced us to dozens of memorable characters, intriguing worlds, and fascinating races. With Final Fantasy XIV free from the PlayStation Store for a limited time, many gamers are turning back to this 2010 favorite.

And as gamers fire up their new save files, they are faced with an important question. Which Final Fantasy XIV race should you choose?

There are eight races to choose from, so you’re certainly not lacking in options. Each race additionally has two separate clans to choose from, each with their own distinct background and lore. Each race has very distinct features and body types, and you cannot change your appearance later in the game. That means those early game decisions will stick with you until the end, so be sure to choose wisely.

The tall, slender members of this race bring elves to mind. The original inhabitants of the world in Final Fantasy XIV, Elzen are traditionally nomadic. As more races began inhabiting their home, they separated into two races. The Wildwood Elzen retreated into the dense woods of Eorzea, while their brethren the Duskwight withdrew into the caves and caverns to live a solitary existence.

Wildwood Elzen’s keen sense of sight marries well with the deep forests they call home. It also contributes heavily to their skill in archery, which is all but unmatched among other Eorzean races.

Unlike their woodland brothers, the Duskwight Elzen tend to avoid the open air. They make their homes in secluded caverns, which has led them to develop excellent hearing. Over the years, they’ve turned to less savory methods of survival, which has earned them the scorn of their Wildwood peers.

The most humanoid of Final Fantasy XIV races, the Hyur are also the most populous race in Eorzea. Seems fitting. They tend to be somewhat more diminutive than other races, and are particularly notable for their odd, rounded ears. Their ability to maintain over long distances sets them apart from other races.

Midlanders are broadly considered the most educated clan in Eorzea. Though males tend to be somewhat larger than females, there is no notable distinction between genders. This well-educated race has stretched itself through every inch of Eorzea and can be found in just about every city and town you come across.

The first of the Hyur to reach Eorzea, Highlanders are notably larger than their Midlander brethren. Unfortunately, their numbers have been dwindling over the years, particularly following the fall of Ala Mhigo. These big-boned humanoids can most often be found in Ul’dah working as sell swords and performing mercenary work.

This charming race is composed of what appear to be children. Despite their rotund little bodies, however, most Lalafell are very much grown. Simple, Hobbit-like folks, Lalafell are all about agriculture. They’ve gradually made their way into Eorzea from their southern homeland. They are immensely populous throughout the world and tend to get along with everyone.

The biggest difference between Plainsfolk and Dunesfolk—apart from their hair color, of course—is where they prefer to reside. Plainsfolk tend to make their homes exactly where you’d expect: among the grassy plains of Eorzea. Their earthy-toned hair helps them to conceal themselves from enemies when their wits and clever tongues don’t cut it.

The Dunesfolks’ striking eyes easily distinguish them from their grassland brethren. A sheer protective layer covers their eyes, serving as protection against the blistering sun of their homeland. These tiny folks make their homes atop massive beasts of burden and wear small gemstones in their foreheads to indicate their zodiac sign.

The members of this cat-like race made their way to Eorzea back in the Age of Endless Frost. Their sea-faring lives shifted to the earth when they relocated, and Miqo’te are now known as some of Eorzea’s best hunters. Each member of this race has a keen sense of smell and superior balance. They also tend to lead solitary lives, away from the bustle of cities and towns.

Seekers of the Sun

The Seekers of the Sun are one of two Miqo’te religious sects. They worship Azeyma the Warden, and are at their most active during daylight hours. They are distinguished by their narrow, cat-like eyes, which allow them to thrive in their preferred environment.

Keepers of the Moon

Near-opposites of their sun-loving brethren, the Keepers of the Moon are most at home once night has fallen. They worship Menphina the Lover, the goddess of the moon. Their large, rounded eyes and dark fur distinguishes them from the Seekers of the Sun, as do their larger ears and slender tail.

The burliest of Eorzea’s races, the Roegadyn are hardy, rugged people. The majority of Roegadyn make their living on the seas, working as sailors, fishermen, and pirates.

The Sea Wolves, predictably, make their living through seafaring means. In times past, this clan was the scourge of the seas. They devastated coastal cities and towns before they settled into the far more peaceful existence they now lead. While some Sea Wolves still find employment as pirates, the majority instead spend their lives as fishermen, sailors, and naval mercenaries.

Unlike their maritime brothers, the Hellsguard make their homes solidly on the earth. Just as big and burly as their brethren, the Hellsguard keep watch in the volcanic regions of Eorzea. Their chosen home provides little in the way of sustenance, however, forcing young Hellsguard to take to populous cities and towns. There, they make their livings as sell swords.

Rumored to be the offspring of Hyur and dragons, Au Ra sport stunning horns and beautifully scaled skin. They are natives of the far eastern continent of Othard, a mountainous region known for its lush valleys.

The Raen believe themselves to be decedents of the Dawn Father. Their brilliant white scales, typically bronzed skin and stalwart wills are all attributed back to this divine lineage. Unlike their brethren the Xaela, the Raen live peaceful, secluded lives. No longer nomads, they’ve settled in Othard’s mountainous eastern region.

Far more violent and combative than their valley-dwelling counterparts, the Xaela believe their blood has more in line with the Dusk Mother than the Dawn Father. Their inky black scales, combined with a tendency toward fiery personalities, contribute to this belief. The Xaela never left their nomadic ways behind, and can still be found wandering the reaches of Othard.

Veterans of Final Fantasy XII will well remember Balthier’s lithe and capable right-hand, Fran. She may be Final Fantasy‘s most memorable Viera, but this race has been an important part of the franchise for decades. Importantly, male Viera are few and far between. The majority of this long-legged, rabbit-eared race is female. They are prohibited from contact with the outside world on the threat of banishment, so witnessing a Viera in the wild is rare indeed. A matriarchal society, the Viera serve as protectors of their woods against any insidious outside force.

Rava Viera primarily reside in the Golmore jungle. They remain an independent dominion, despite attempts by the Dalamascans to conquer them. The males, rarely seen in villages or towns, keep vigil in the woods. Females are skilled hunters and fierce protectors of their homes and families. Rava’s darker skin allows them to blend in with the wood’s natural shadows, lending them all the more skill in hunting.

The Veena sport far lighter skin than the Rava, which matches their snowy environment near the Skatay Range. Unlike many of the clans on this list, however, the two Viera clans have little else to distinguish them. Like Rava, Veena are skilled hunters and generally keep to the woods. They tend to the forest in which they make their home, nourishing its growth and protecting it from outsiders.

One of the largest Final Fantasy XIV races, the Hrothgar also have the least in common with Hyur. While they are still somewhat humanoid in build, these burly warriors sport uniquely leonine appearances. When this race, composed primarily of males, initially left their home of Ilsabard for Eorzean shores, natives of Eorzea viewed them with fear. As the years passed, however, and the Hrothgar gained mastery of common tongue, those fears eased. Now, Hrothgar live peacefully alongside Eorzea’s other races.

Very few Helions wander Eorzean land. Due to their continued devotion to their queens, most Helions still reside in their homeland. More recent years have seen this pious clan begin spreading to surrounding continents. Despite their expanded reach, however, the lives of most Helions continue to revolve around their respective queen.

The far more nomadic and adventurous Hrothgar clan, the Lost have been wandering Eorzea for years. They no longer follow any monarch, instead choosing to live untethered, mobile lives. This wandering lifestyle contributed to their eventual common careers in mercenary work and trade.