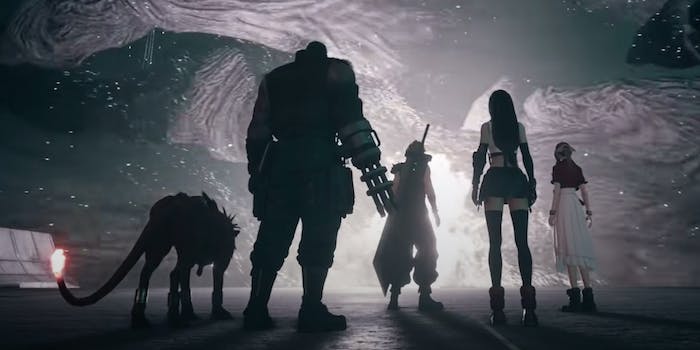 This staggeringly beautiful game will keep players entertained for days on end.

After more than a decade in development, the remake of Final Fantasy VII hit shelves on April 10.

The resulting game is an absolute beast. The whopping 85.82 gigabyte game packs in dozens of hours of gameplay in the sprawling city of Midgar. The battle mechanics are complex but engaging, and the staggeringly beautiful world will keep players entertained for days on end.

Final Fantasy VII Remake is a loving recreation of the cherished 1997 original. Everything has been redesigned, down to minute details on each beloved character. The mechanics are streamlined and polished, allowing for an immersive experience that encourages exploration of the broad, complex world.

The character movements and interactions have a classic Square Enix feel. While the rest of the game relishes its sleek, modern realism, the characters’ choppy movements and awkward dialogue provide a constant callback to the game’s predecessors. Whether this is a delightful bit of nostalgia or an immersion-breaking flaw likely depends on the player. Die-hard fans of the original title will probably view the characters as a charming nod to their grainy, oversaturated roots.

For newcomers to the game, as well as many fans of more modern games, however, the characters’ appearance may instead irritate. Every character is beautifully crafted and looks gorgeous—they just don’t feel like they belong in the world around them. Overexaggerated movements, excessively pristine clothing, and giant eyes fit into the genre flawlessly, but they feel awkward in the strikingly realistic world around them. The decision was almost certainly purposeful, but to players unfamiliar with Square Enix titles, it may come off as strange.

Despite this minor note, Final Fantasy VII Remake is well worth the $60.00 price tag. The story is cinematic and well-directed, expertly melding the feel of a blockbuster movie and a AAA game. The quick and painless load times certainly don’t hurt—assuming you have a digital copy.

The battle system, much like the character design, recalls its roots but employs a far more current style. The remake approaches combat in an engaging, if initially complicated, fashion. Newcomers will likely struggle to learn to utilize all of their special moves, potions, and spells at first—not to mention team members—but the controls will quickly become instinct.

Players with more experience playing Final Fantasy titles are at a clear advantage over newcomers to the game. The battle system’s design is reminiscent of the old, turn-based system, but with a major upgrade. The remake shifts to approach battles with an appealing modern style that will help even brand-new players adjust to the more complex group battles.

While it may take a few tries to get the hang of, Final Fantasy VII Remake‘s battles really are a delight. Each new character brings with them diverse combat options, which provides a variety of styles for players to switch between. Cloud’s classic heavy-handed style is dominant, but through the game, players will be provided ample opportunity to switch it up through the other character options.

The game’s neo-noir, Blade Runner-esque setting perfectly marries with its gritty but heartfelt tone. Despite the slightly off-putting differences in the character design, the aesthetic of the game is superb. Match the exquisite level design with seamless mechanics, addicting gameplay and rousing battles, and you have a recipe for perhaps one of the best games of the year.

Final Fantasy VII Remake is available now on PlayStation 4. This review was written based on a version of the game provided by the publisher.