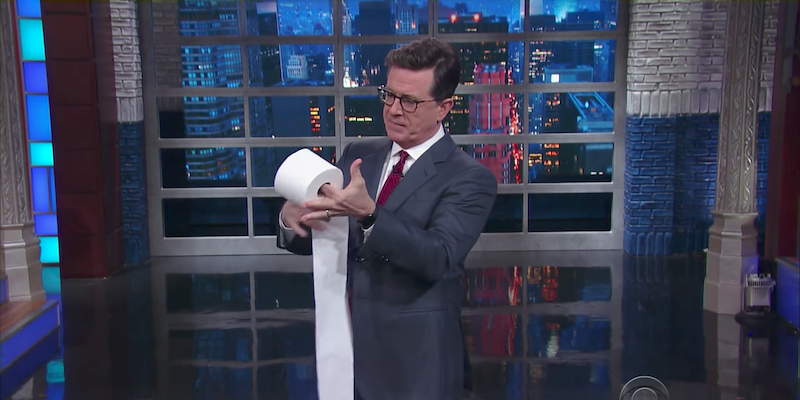 The show could get slapped with a fine.

Stephen Colbert‘s run-ins with controversy over his homophobic Donald Trump and Vladimir Putin joke during his anti-Trump rant from earlier this week are just beginning.

Speaking on Talk Radio 1210 WPHT with the Rich Zeoli Show, FCC Chairman Ajit Pai said the commission has received “a number” of obscenity complaints related to the Late Show joke, in which Colbert said “the only thing [Trump’s] mouth is good for is being Vladimir Putin’s cock holster.” Pai promised a comprehensive investigation to determine if the late-night show should be penalized.

“I have had a chance to see the clip now and so, as we get complaints, and we’ve gotten a number of them, we are going to take the facts that we find and we are going to apply the law as it’s been set out by the Supreme Court and other courts and we’ll take the appropriate action,” Pai said, according to CBS Philadelphia.

To be considered obscene, content must “appeal to an average person’s prurient interest; depict or describe sexual conduct in a ‘patently offensive’ way; and, taken as a whole, lack serious literary, artistic, political or scientific value.”

“Traditionally, the agency has to decide, if it does find a violation, what the appropriate remedy should be. A fine, of some sort, is typically what we do,” Pai said.

Colbert and his Monday night rant came under fire the following day by both LGBTQ advocates and Trump supporters. The former claimed the joke was homophobic in suggesting that oral sex between two men is demeaning, while the latter took issue with the 12-minute monologue railing against the president. Both groups have called for Colbert’s firing.

On Wednesday, Colbert responded to calls for his removal from the show by stating he would do the rant again and use better language during his rant during the “choice insults,” but he didn’t apologize.

“I believe he can take care of himself. I have jokes, he has the launch codes, so it’s a fair fight,” Colbert said. “Now I’m not going to repeat the phrase, but I just want to say, for the record, life is short, and anybody who expresses their love for another person in their own way, is to me, an American hero.”